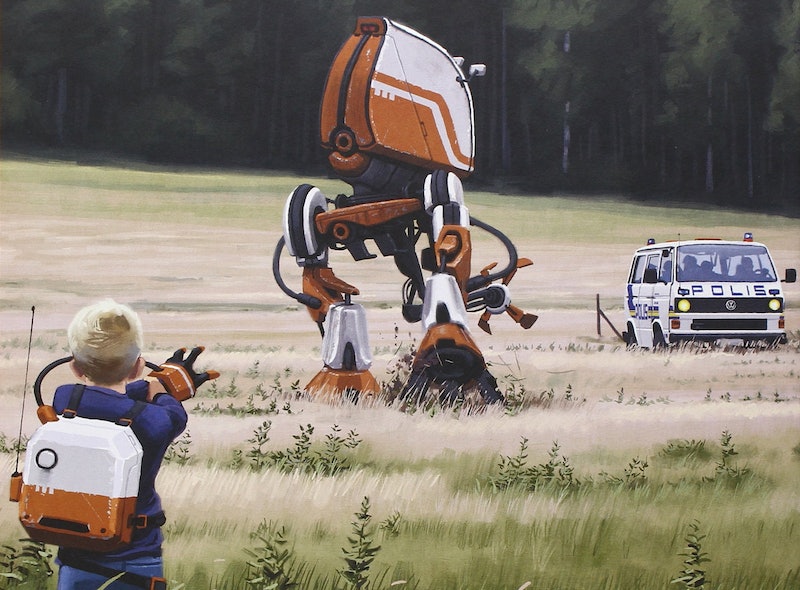 If you've ever scrolled through Amazon's selection of grown-up card and board games, you've seen it: Tales from the Loop, the art book and role-playing game that imagines an alternate 1980s in which the science fiction technology of Tron and Short Circuit became reality. Now, this Swedish art book is being turned into a TV series, and it might be Amazon's Stranger Things competitor.

Simon Stålenhag's Tales from the Loop contains lush, photo-realistic paintings of Swedish countrysides dotted with robots and alien structures, which makes for some seriously disconcerting and fascinating art. The book is currently the #1 bestseller in Conceptual Arts on Amazon.

Stålenhag began publishing his artwork on the Internet in the early 2010s, and the first Tales from the Loop book hit stores in 2015. The artist followed that with another art book, Things from the Flood, in 2016, the same year that Modiphius Entertainment Kickstarted a tabletop role-playing game based on his first book. The game was a hit, and Geek & Sundry, a site for all things geeky, voted the Tales from the Loop game its "favorite RPG of 2017." It is now available for purchase on the Modiphius website.

Tales from the Loop by Simon Stålenhag, $33, Amazon

Amazon's Tales from the Loop won't be based on the role-playing game, however. It's unclear just how the team behind this project plans on bringing these books to the small screen, but one thing seems probable: The show won't take place in Sweden. On Wednesday, Stålenhag tweeted his response to a fan question about the basis and setting for the TV series, saying, "The show is not based on the RPG, it's based on my first book. It will most likely not be set in Sweden — from the beginning I wanted a US screenwriter who could create a personal American parallel story, instead of trying to mimic the 'Swedishness' of the book."

The Tales from the Loop TV series will be headed by Nathaniel Halpern, a writer known for Legion, and produced by Fox 21 Television Studios. Variety reports that The Passage producers Adam Kassan and Rafi Crohn, and The Batman writer-director-producer Matt Reeves will executive produce alongside Halpern and Never Let Me Go director Mark Romanek, who will direct the series pilot. From Swedish production company Indio come three additional executive producers: Johan Lindström, Mattias Montero, and Samantha Taylor Pickett. Fox 21 Television Studios Executive Vice President Jane Francis tells Variety that "Nathaniel’s deeply inspired vision for this world, and the stories he has created from an incredibly passionate and emotional place, that will drive this series and its storytelling."

Tales from the Loop is not the only book Stålenhag has headed to the screen. The Russo brothers, best known for Avengers: Infinity War), optioned The Electric State, Stålenhag's upcoming book, with Marvel screenwriters Christopher Markus and Stephen McFeely and It director Andy Muschietti attached. Stålenhag Kickstarted The Electric State last summer, and according to the crowdfunding campaign page, the "new narrative artbook" tells the story of "a girl and her robot traveling west in an alternate 90s USA." Non-backers can pick up their copies of The Electric State this fall.