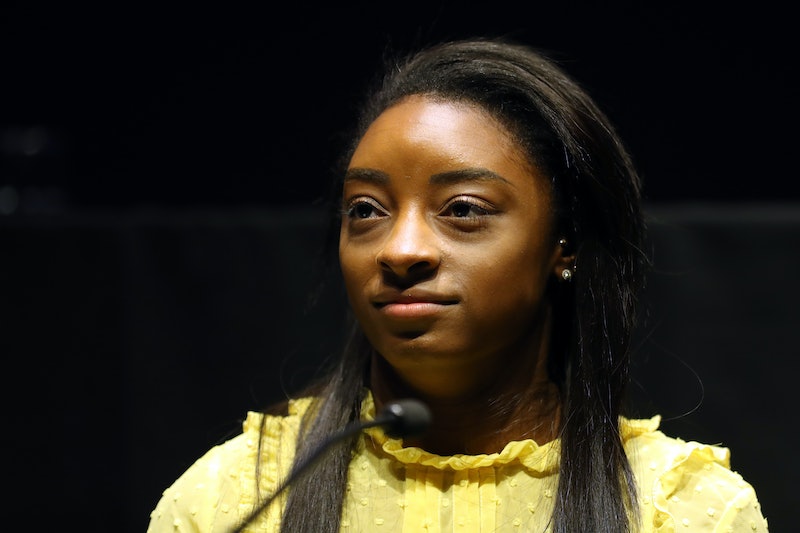 Coping with the aftermath of sexual assault is no trivial matter. In an interview with Priyanka Chopra on the YouTube series If I Could Tell You Just One Thing, Olympic gold medalist Simone Biles opened up about the sexual abuse she experienced by former USA Gymnastics team doctor Larry Nassar.

The Olympic athlete said that she initially tried to "brush off" her experience. "I’m not willing to put that out there for the world to see," Biles told Chopra. "They’re not going to see me as Simone the gymnast, they’re going to see Simone the sexual abuse survivor." Biles then confided in one of her attorneys. "I told one of my lawyers, I said, 'I sleep all the time, because it’s the closest thing to death,'" she said.

In early January 2018, Nassar was sentenced to up to 175 years in prison after more than 150 women publicly accused him of sexual assault in his capacity as a prominent sports doctor. That year, Biles told the BBC, "It was very hard [to speak out] but I figured out that I can tell my story then it might encourage other people to tell theirs."

Time and again, studies have shown that sexual assault survivors may suffer depression and trouble with sleeping normally after the abuse takes place. The Rape, Abuse, And Incest National Network noted that survivors of sexual violence may experience symptoms of sleep disorders, including "sleeping at unusual times of day, or sleeping for longer or shorter than usual."

Biles went public about the Nassar's sexual assault in January 2018. In a note shared on Twitter, she wrote, "Most of you know me as a happy, giggly, and energetic girl. But lately, I've felt a bit broken and the more I try to shut off the voice in my head, the louder it screams. I am not afraid to tell my story anymore."

"I, too, am one of the many survivors that was sexually abused by Larry Nassar," Biles wrote. "Please believe when I say it was a lot harder to first speak those words out loud than it is not to put them on paper. There are many reasons that I have been reluctant to share my story, but I know now it is not my fault."

In her note in 2018, Biles also wrote about how she had to grapple with feelings of confusion, guilt, and doubt at first. "It is impossibly difficult to relive these experiences and it breaks my heart even more to think that as I work towards my dream of competing in Tokyo 2020, I will have to continually return to the same training facility where I was abused," she wrote.

Speaking out about sexual assault can be a daunting experience, but Biles told Chopra in the interview that she's stronger for it. "I'm a stronger woman today," the gold medalist told Chopra. "Telling my story has helped younger girls."