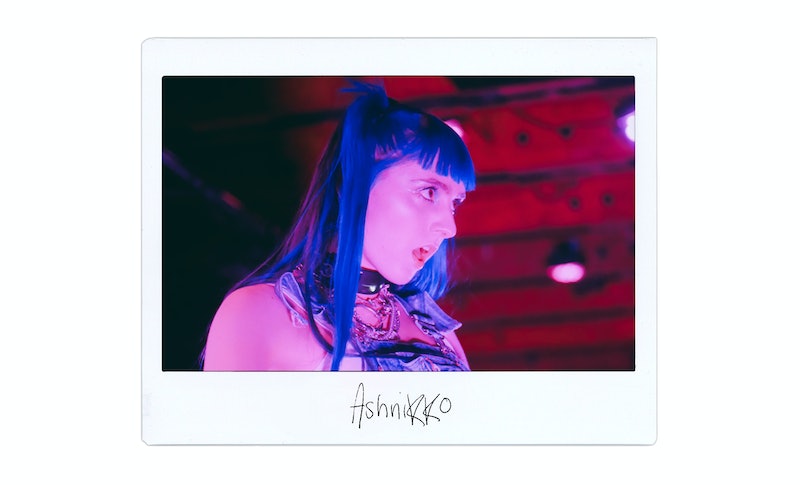 When celebrities hang out with Bustle editors, we want to give them the chance to leave their mark. Literally. So we hand them a pen, a piece of paper, a few questions, and ask them to get creative. This time, singer songwriter Ashnikko is leaving her mark in the Bustle Booth.

While some artists raise awareness of the feminist movement with soft euphemisms and a gentle girl power narrative, there’s something different about 23-year-old singer-songwriter Ashnikko. Her mantra has always been clear, and shouted loudly, with the aim of bringing together art, music, and sexual liberation. The singer believes no woman has the responsibility to shrink herself or shy away from brilliance, and she uses her brand of "'f*ck you' alternative pop" to deliver that message.

"I’ve been absolutely obsessed with music, songwriting in particular, since I was about 10 years old," she says, speaking about her music career began. "I knew from about 15 that I wanted to make a career out of it. My mind became very stubbornly set on making it my career. I never entertained the idea of doing anything else. I have hundreds of songs that I’ve written in notebooks scattered between my parents’ houses. Horribly written songs, but songs nonetheless. I was so inept at every single job I had before I started doing music full time. Like, SO INEPT."

Growing up in super conservative North Carolina, Ashnikko used myspace and tumblr to find escape and inspiration. At 13, she moved to Estonia and Latvia, which triggered a slight identity crisis within her. However, between doodling in her notebooks during class and trying to build up a new friendship group, she started to curate a set of strong, unapologetic female musical influences she found online. Up until the age of 17, the singer explains, she exclusively listened to female artists and now counts the likes of Bjork, Janis Joplin, and Nicki Minaj as feminist and sex positive influences that shaped her music and writing.

Speaking in more detail about female musical influences, she says: "M.I.A.’s Arular is the album that kinda sparked my obsession with making music. 10-year-old me absolutely lost her f*cking shit when she heard 'Bucky Done Gun,'" Ashnikko says. "I’m really really admiring Tierra Whack right now. She’s so entirely herself. It’s amazing to see and listen to. She makes me very excited about music right now."

While the move was exciting, it was also challenging, as Ashnikko had to sleep on friends' sofas and work long, hard days to get people to recognise her talent. Speaking about what she's learned over the years, Ashnikko says, "I was a little doe eyed baby who thought this sh*t would come easy and that everyone had my best interests at heart. I wish I could go back, slap her in the face and tell her to boss the f*ck up and watch her back."

Everything about Ashnikko, from her music and lyrics to her aesthetic, is bold. She released her first EP, Sass Pancakes, in 2017. She’s developed her alternative pop sound in her new EP Hi It’s Me and if you’ve gone through heartbreak or betrayal, this music is for you. “STUPID” (which features Yung Baby Tate) has already had serious success online, going viral on TikTok in a matter of days.

The future seems to incredibly bright for Ashnikko. She says she’d like to collaborate with the likes of Post Malone, Paramore, Doja Cat, Dolly Parton, Paris Hilton, Rico Nasty, and, best of all, Louis Theroux. (I’d pay big money to listen to the latter.) As far as the next year goes, “I’m sitting on so much music," she says. "With everything that’s happening now with 'STUPID' going viral, I’m excited for even more people to hear all that new stuff. And it’s just opened more doors for me to perform all over the world. Expect me to step it up a big ol’ notch. I literally can’t stop smiling thinking about it."

Learn more about Ashnikko in her Bustle Booth questionnaire below.