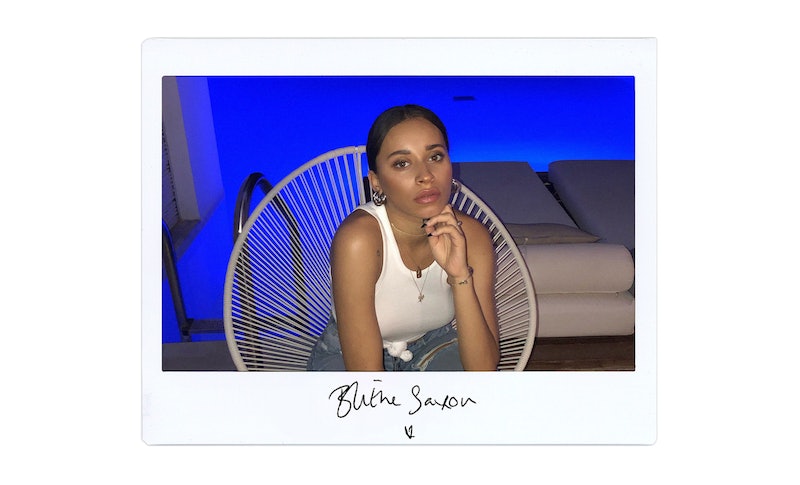 When celebrities hang out with Bustle, we want to give them the chance to leave their mark. Literally. So we hand them a pen, a piece of paper, a few questions, and ask them to get creative. This time, pop sensation Blithe is leaving her mark in the Bustle Booth.

With so much amazing talent out there right now it’s no small task breaking into the music industry. Alongside killer songs, and relatable lyrics you’ve got to have personality and Blithe has that in bucket loads. Following the success of her debut EP “Don’t Blink” which was released in April 2019 she’s marked herself out as an artist to keep an eye on. “Becoming You” came out at the end of Nov. 2019 and was a much more stripped back, raw melody about love and loss. She’s been riding high from its success ever since.

Instead of looking at the industry and feeling daunted she highlights all the inspiration that’s out there. “I have a lot of respect for women who have conquered more than just the music, women who have a real attitude, and make a statement with talents that spill into their visuals and acting abilities too,” she says, “real performers all round. J-lo is a queen. Gaga, Rihanna. Lizzo’s music and attitude slaps so hard.” You only need to watch one of Blithe’s music videos to see she’s following in the steps of the artists she admires, They’re as much a piece of art as the music she’s produced. And when asked if she could collab with anyone she says, “Lizzo, please.”

From her early days growing up in Rugby, music and performance have always been massive important to Blithe. In an interview with Pop Justice she explained that she attended the prestigious Slyvia Young Theatre School and says, “I juggled music and work for years before I could just do music full time. I worked in the evenings in clubs and bars mostly so I’d do sessions in the daytime and then run to work straight after. I got fired a lot because as much as I tried to hide it, it was obvious my head was somewhere else and I’d take nights off for gigs and any opportunities I could find.”

While music was always her main passion, developing herself as an all-round performer has always been her goal. If music wasn’t on the cards she explains, “I would’ve continued acting and I’d like to think I’d be in a TV show or some movies by now. I haven’t quit acting it's on hold in this stage of [my] music career, but its something I will pursue to full effect in the future. I want to star in the movie, write the soundtrack, perform the songs in the film, direct it, write it, produce it. Full on A Star Is Born vibes. Or J-LO in Hustlers.”

After moving to London at just 16, Blithe taught herself to play the guitar and piano. While she’s enjoying the fruits of her efforts, her journey hasn’t come without challenges along the way. “Everyone wants something from you. Everyone thinks they know best. People lead you on and pick you up when you’re hot and put you down when you’re not and nobody is going to work harder than yourself,” she explains. “It’s all smoke and mirrors and there’s a lot you have to fight for as an artist to drive your creations and not let things around you destroy your spirit because even with a foot in the door, there are so many knock backs and nos.”

In the 12 months since she released her first track, Mission Blithe has established herself and her sound. Upbeat pop melodies with darker and more soulful lyrics bring something totally new. She explains how she's come to find her signature sound. “I had to learn that even if you trust someone's opinion, if I don’t listen to my own instinct and trust my own creative vision, it's very easy to end up with something I’m not proud of.”

Blithe has made huge moves this year, so 2020 could hold all sorts of surprises for the singer/songwriter. What she does know for sure is there’s new music on the horizon. She says, “the next single is the one I’ve been dying to release and I can't wait to put it out along with the other things I’ve been working on! I’m gearing up to do a UK tour and I’m just excited to create music that I love and connect with some more people.”

Get to know more of what makes Blithe tick in her questionnaire below.