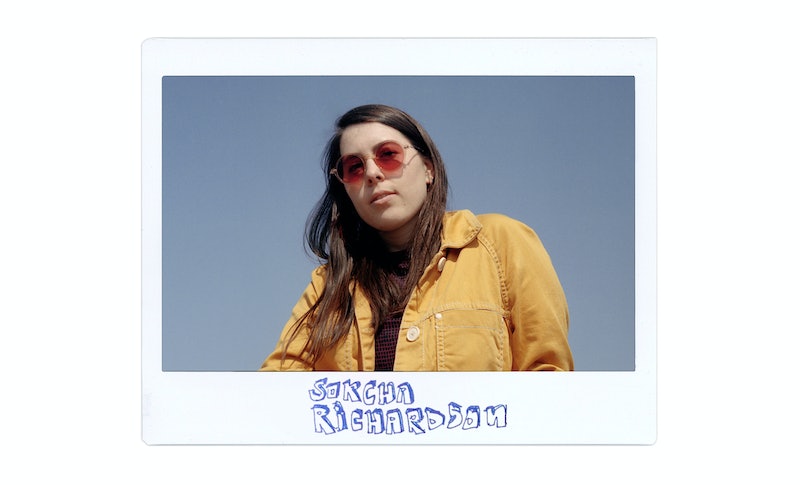 When celebrities hang out with Bustle editors, we want to give them the chance to leave their mark. Literally. So we hand them a pen, a piece of paper, a few questions, and ask them to get creative. This time, singer songwriter Sorcha Richardson is leaving her mark in the Bustle Booth.

So many people dream of growing up and rocking the music world, but very few actually get there. So, instead of just dreaming, Sorcha Richardson spent hours songwriting, recording lo-fi demos in her dorm room, and releasing her early work on Soundcloud. To say she’s had passion and drive from the beginning is an understatement. "Music has always been the thing that has excited and fascinated me more than anything else and I don't think that will ever change, regardless of my relationship to it as a career," she explains.

The Irish-born singer recently released “Honey” and “Don’t Talk About It” to much critical acclaim, and has previously had her work described by The Last Mixed Tape as having "stark striking intimacy."

The first LP on her upcoming debut album First Prize Bravery will be released on Nov. 8, and you need to listen out for it. Speaking about the work that went into her debut album, she tells Bustle, “I think I’ve learned more from Alex Casnoff, who produced my album, than anyone. I feel so lucky to have met him and gotten the chance to work with him over the last few years.”

She may be young but Richardson has already got a wealth of experience behind her. She left home in Ireland as a teenager to go to Brooklyn and study creative writing. It was here that she started to create her own music and cultivate a following online. However, it wasn’t a totally easy ride. When it comes to her career, Richardson says she has struggled with self-doubt, saying she had to learn "when to stick to [her] guns and trust [her] instinct."

It’s just as well that she did, as the creative flare and unique style of Richardson’s songs are so much fun, and incredibly unique. She’s spent 2019 touring around the UK and Ireland as well as working on the songs for her new album. “My album comes out next month, then I have an Irish tour and some European shows in the new year which should be announced soon! I’m hoping to come back to the US for some Shows in 2020,” she says, “I know there are people who have been waiting patiently for a US tour. I’m just excited to tour as much as possible. These songs are very fun to play live and love my band so we’ve been having fun on the road lately.”

Richardsons first LP from her first album, “First Prize Bravery” comes out on Nov. 8. Check out the rest of her Bustle Booth answers below.