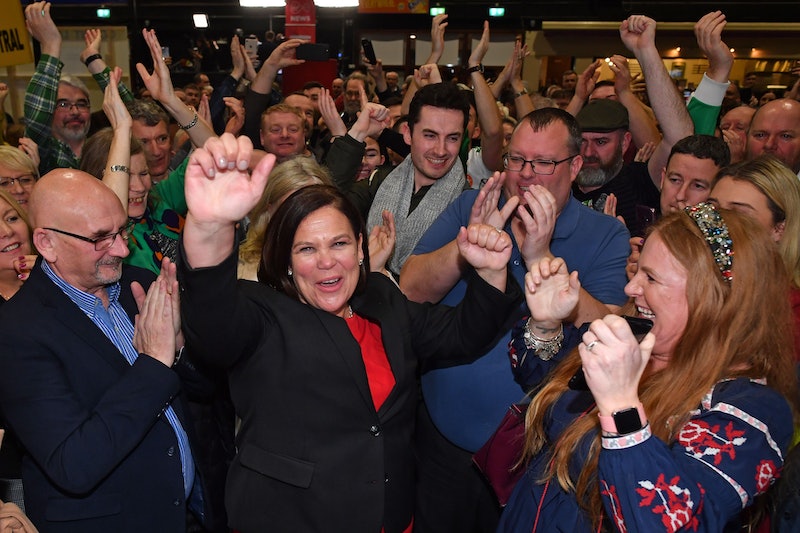 The results of Ireland's historic 2020 election are in and Fianna Fáil have won by a small margin, beating the second largest party, Sinn Féin, by just one seat.

This is one of the best electoral results on record for Sinn Féin, who have gained 16 seats in comparison to the election in 2016. Despite winning one less seat than Fianna Fáil, as the Independent points out, "the two parties were effectively tied on the same number of seats, as the Fianna Fáil speaker was re-elected without contest."

Along with the number of seats, Sinn Féin, led by Mary Lou McDonald, had a number of victories to celebrate after the 2020 election. As the Independent writes, Sinn Féin “won the election’s popular vote” as well as its seats, with some suggesting they could have won more “if it had fielded more candidates.”

Fine Gael, on the other hand, suffered a loss. The party, whose leader Leo Varadkar led the outgoing government as taoiseach, gained just 35 seats.

As BBC News reports, analysts suggest that Sinn Féin’s success came as a result of the party's ability to “tap into the public anger felt in the Republic of Ireland over issues that have dogged centre-right Fine Gael for a number of years — a shortage of housing, rocketing rents and homelessness.”

Despite securing the popular vote, however, Sinn Féin’s “place in the next government is far from certain,” the Independent writes. McDonald has said that she wants to “form a coalition of left-wing parties and independents, without the involvements of centre-right Fianna Fáil and Fine Gael.” However, as a BBC political analyst points out, “attempts to form a new coalition-of-sorts ... will be complex,” citing the fact that it took “70 days for a government to be formed” after 2016's election produced no outright winner. This led to a “minority Fine Gael government,” and then taoiseach Enda Kenny being re-elected.

More like this
This Is When Netflix Is Going To Start Charging You For Sharing Passwords
By Darshita Goyal
Eurovision Has Been Given A Whole New Look Ahead Of Its Liverpool Debut
By Bustle UK
Here’s Where The NHS Nurses’ Strike Currently Stands
By Sophie McEvoy
Pret & Costa’s Coffee Is The Strongest On The High Street, According To Which?
By Sam Ramsden
Get The Very Best Of Bustle/UK
Sign up for Bustle UK's twice-weekly newsletter, featuring the latest must-watch TV, moving personal stories, and expert advice on the hottest viral buys.