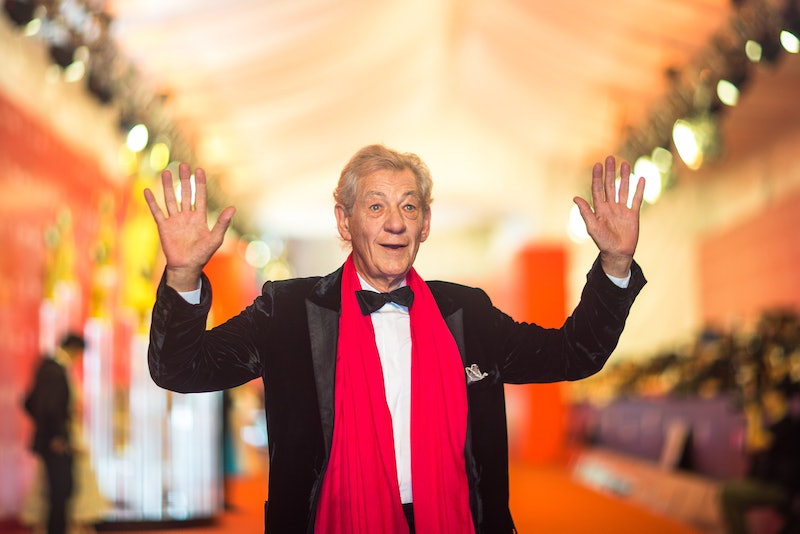 I once got great advice as a child after becoming frustrated in an argument. The advice was, that if I was too upset about something to explain it coherently, face to face, to collect my thoughts and write them down in a letter. That way, my emotions wouldn't get the better of me or the person I was arguing with, and my point could be clearly heard and explained. Yesterday, I saw that advice in action. Sir Ian McKellen wrote a letter about the Women's Marches after participating in it himself, and it puts the protest into perspective for those who don't seem to grasp the concept.

When political tensions are high, it's pretty darn hard to get people to listen to one another rather than waiting for their turn to speak. Which is why McKellen's clear, concise, and comical, play-by-play of the protest and events leading up to it is a fool proof way to get the point across. And, the best part? Despite the fact that he was there participating, the actor made it known that it was a movement by "The Women" (yes, capitalized). But of course, he didn't forget to include the importance of the allies involved, either.

In the letter, McKellen first addressed the look, feel, and make up of the London Women's March crowd, explaining:

"The Women's March in London was the longest I have been on. Unlike most demonstrations it was not commandeered by any one group with its identical posters. The Women and their allies had devised their own visual protests, hand written and improvised at home, expressing their personal reaction to the new President, whose name in schoolyard English means "to break wind" appropriately."

He then goes on to explain, after shouting out the Sir Patrick Stewart facepalm poster, why he sees that some feel the need to "demonstrate" while others don't, and did so with perfect mixture of gusto and snark.

"...President Breaking Wind has impacted us all; and personally. Some like him, they think they can identify with him, believe him because they've seen him on television perhaps and think the billionaire and his billionaire team are truly their friends. The rest of us, including the majority of voters in the USA, see through the charade: after all, the shtick is not exactly subtle. But he's riled us, gotten under our skin, making us angry and despairing that he should have got through to the final of his show and turned democracy into a TV/Twitter spectacular."

He goes on to predict what will happen, all the while making a call to action and countering the argument some who are on the fence about the president thus far have made.

"What will happen? No doubt his believers will soon be disillusioned. The rest of us cannot let him reign unchallenged. The Marches worldwide were a good beginning. Some who fear him say, "give the man a chance." OK— he's started by removing LGBTQ people, climate change, and state funding of the arts from POTUS's website. He's had his chance."

As per his succinct Twitter bio, the "actor and activist" gave it to both the naysayers and skeptics straight. The Women's March wasn't only justified, but actualized. And, it helped to revitalize those who have felt downtrodden or scared by the rhetoric that's been spewed by the current commander-in-chief and those who support him.

It was about taking a stand.