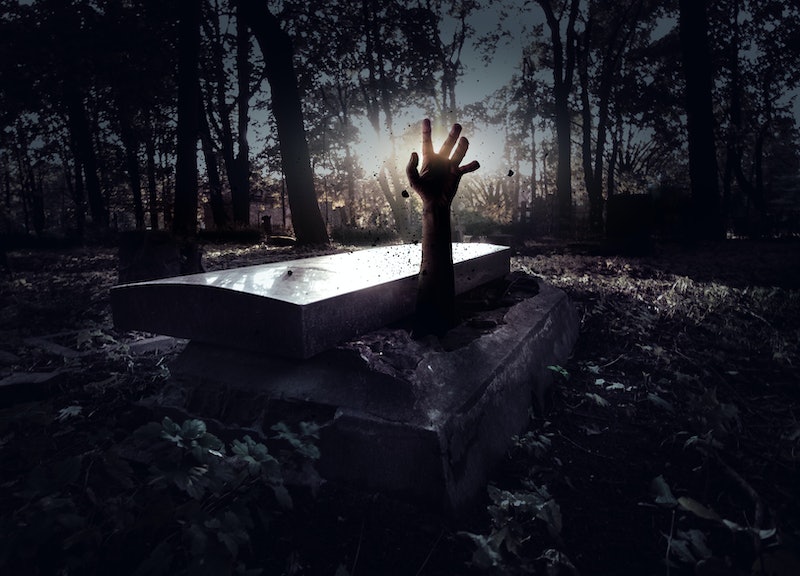 I would argue Halloween gets even better as you age. Though the holiday is typically associated with kids, what they can do to celebrate the spookiest night of the year is far more limited than what adults can. Not to hate on trick-or-treating, but true Halloweenies know the best Halloween candy is that which goes on sale November first.

Since you're waiting an extra day for a sugar high, you have ample opportunity to explore more unique ways to celebrate. Those unfamiliar with claustrophobia and looking for a thrill should enter the Six Flags Macabre Challenge. No, you didn't switch tabs over to The Onion.

According to Newser, Six Flags St. Louis is offering brave souls the challenge of a lifetime that just so happens to involve simulating death. Per the St. Louis Post-Dispatch, one lucky person who completes the Six Flags America 30-Hour Coffin Challenge will win three hundred dollars. The challenge is pretty self-explanatory: a competitor must stay in a coffin for thirty hours. They are allotted one six-minute bathroom break each hour, and allowed to bring a pillow and blankets, and a cell phone.

The contest is set to take place between 1pm on Oct. 13 and 7pm on Oct. 14. Six contestants will be chosen to compete in total.

Some more rules to keep in mind are that you can't bring snacks or drinks, though Six Flags will feed you; you won't go thirty hours without food. You can bring a friend to accompany you while Fright Fest is taking place, but when the park closes for the night they have to leave while you remain in the coffin. Coffins are pretty compact, measuring two feet by seven feet. You must be at least 18 years old to enter, and cannot have any diagnosed medical conditions that would make laying horizontally for a day and a half a danger to you.

On the flip side, the winner(s) will walk away with some pretty sweet swag. The bravery of the winner of the thirty hour coffin challenge will be rewarded with two 2019 Gold Season Passes and a Fright Fest Prize Package with tickets to the haunted house and Freak Train, in addition to $300. If multiple people make it, all will receive the prizes, but there will be a further drawing for the money.

Most exciting, winners will get to KEEP. THE. COFFIN. That's right, by staying flat for thirty hours, you could walk home with free park entry for a year, three hundred bucks, and a REAL COFFIN. If the hours I have spent marathoning Six Feet Under have taught me anything it is that coffins tend to cost a pretty penny, so that may be the best prize of all.

If your not in the St.Louis area, you may not be able to enter the Coffin Challenge, but you can partake in Six Flags' annual Fright Fest. Beginning next Friday, September 28, locations nationwide will be getting spooky with it to celebrate the season.

More like this
Why TikTok Is Obsessed With Caesar Salads Right Now
By Alexis Morillo
TikTok's Butter Board Might Be The New Cheese Plate
By Emma Carey
On TikTok, Tinned Fish Date Night Is The Latest Viral Food Obsession
By Emma Carey
Behind The Hilarity Of The "POV: You Walk Into My Room" TikTok Trend
By Lexi Inks
Get Even More From Bustle — Sign Up For The Newsletter