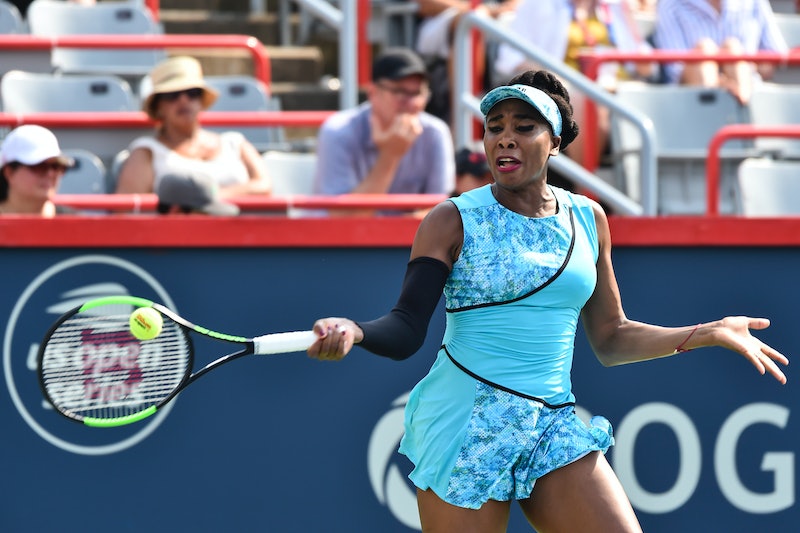 Tennis star Venus Williams is poised to make her 20th appearance in the U.S. Open, and she recently told People magazine about how she manages the chronic illness that forced her to withdraw from the event back in 2011. Sjögren’s Syndrome (pronounced SHOW-grins), the autoimmune disorder Venus Williams lives with, is similar to rheumatoid arthritis and lupus. Williams has managed to become a superstar in the tennis world despite facing the chronic pain and fatigue that is common to the condition.

So what does that feel like? According to the Sjögren’s Syndrome Foundation, those symptoms can range from "a dry, gritty, or burning sensation in the eyes; difficulty talking, chewing, or swallowing; a sore or cracked tongue; dry or burning throat; dry or peeling lips; tooth decay; debilitating fatigue"; and more. People who live with Sjögren’s can also experience rashes, numbness, and tingling in the arms and legs, CBS News reports. Williams told People that she primarily experiences swollen joints and fatigue.

Dr. Calapai tells Bustle that Sjögren’s Syndrome typically occurs in people older than 40, and it's much more common in women than in men. He also notes that treatment is based on relieving symptoms. Sjögren’s Syndrome is similar to other medical conditions, such as lupus, rheumatoid arthritis, fibromyalgia, and multiple sclerosis, and there’s no single blood test that can diagnose the disorder, according to the Sjögren’s Syndrome Foundation, so it takes a process of elimination to get a diagnosis. According to The Mayo Clinic, treatment for Sjögren’s depends on which part of the body is affected by the condition. So, for example, if you’re experiencing eye inflammation, treatment includes special eye drops. If you’re experiencing dry mouth, treatment includes medicine to help you produce saliva.

Williams credits her increase in energy and return to tennis to a drastic change in nutrition. She told Health magazine early last year that she switched to a completely raw vegan nutrition plan to combat her autoimmune disease and to increase her overall health. “I started [a plant-based nutrition plan] for health reasons,” Williams told Health. “I was diagnosed with an autoimmune disease, and I wanted to maintain my performance on the court. Once I started, I fell in love with the concept of fueling your body in the best way possible. Not only does it help me on the court, but I feel like I’m doing the right thing for me.” Williams told People that her nutrition plan continues to be a priority. “I try to take care of myself and take rest and focus on what I eat,” she says. “And obviously getting the best medical care I can.”

Although Sjögren’s Syndrome is incurable, Williams has shown that it's possible to thrive while living with it. Now in her 24th year playing tennis professionally, as People reported, Williams is in the midst of another unforgettable season.