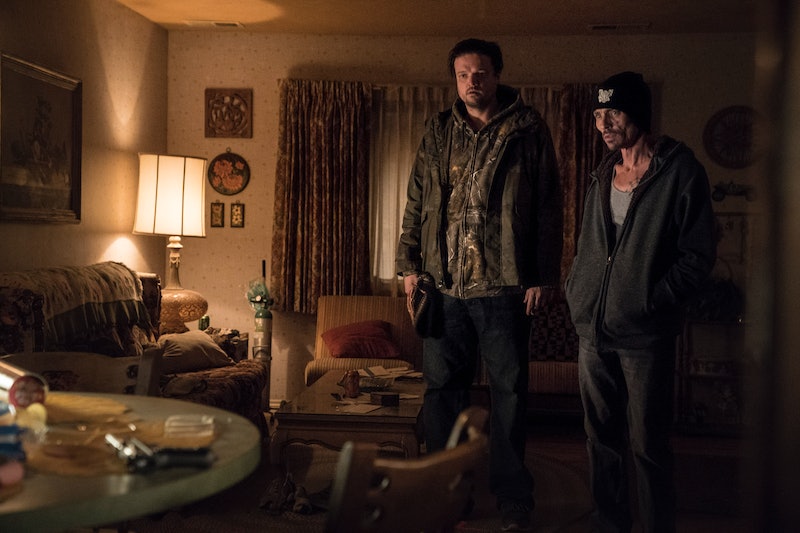 El Camino features the triumphant return of Breaking Bad ne'er-do-wells Skinny Pete and Badger, two of Jesse Pinkman's troubled, not-too-bright buddies. This time around, it seems like the two will be more main characters than comic relief, so if you're confused about the timeline and how they connect to the story, a quick refresher on what happened to Skinny Pete and Badger in Breaking Bad will likely help.

Skinny Pete and Badger appeared throughout the series, and while it's hard to say that anything about their lives was joyful, they did provide a glimpse into what Jesse's life was like before he stumbled into Walter White's life. Whenever Jesse wanted to take a break from the day-to-day grind of cooking and selling meth, Badger and Skinny Pete were there to help. But as Jesse's life got progressively complicated, he had less time for his friends, and the duo only appeared in the show's final season three times. In their final appearance, Badger and Skinny Pete didn't reunite with Jesse one last time, but instead did a favor for Walter.

While attempting to threaten his old business partners, Elliott and Gretchen Schwartz, into donating his money to his son in the case of his eventual death, Skinny Pete and Badger sit in the back of Walt's car armed with nothing more than laser pointers meant to be mistaken for laser sights on rifles. For their help, Walt pays the pair $10,000 each and they reveal that Blue Sky meth is still being sold, although they were under the impression Walt had been cooking it and Jesse had had moved to Alaska.

That's the last time Breaking Bad fans saw the dynamic duo, which means the two are in for quite a shock when they learn in El Camino that not only is Jesse alive in Albuquerque, but that he's been subjected to physical and psychological torture for months as a prisoner of the neo-Nazi group that killed Hank, captured him, and chased Walter out of Albuquerque in the latter half of Season 5. In the trailer for El Camino, Jesse is seen going to Skinny Pete's house to hide out from the cops immediately after his escape in the Breaking Bad finale.

In the trailer, Skinny Pete and Badger appear not just shocked to see Jesse back in Albuquerque, but heartbroken at the sight of him, scarred and ragged. Jesse clearly has some unfinished business left, but his visit to Skinny Pete and Badger is a crucial stop for him to not just recover from his imprisonment but to reconnect with perhaps the last two people on the planet who actually care about Jesse.

Badger and Skinny Pete may have never been crucial to the plot of Breaking Bad — but they were crucial to Jesse's character. While they've been in the background for most of Breaking Bad, El Camino brings them to the forefront as Jesse's sole support system. Of course, given that Badger and Skinny Pete's idea of support is not going outside, smoking a lot of weed, and playing video games all day, it might be time for Jesse to find some new friends. And fast.

More like this
“The Door Is Always Open” For Another 'Breaking Bad' Spin-Off, Says AMC Boss
By El Hunt
Who Could Die In The Stranger Things Season 4 Finale?
By Kadin Burnett
20 Photos Of "Beefy" Jeremy Allen White To Tempt You To Watch 'The Bear'
By Radhika Menon
Everything To Know About The Terminal List Season 2
By Kadin Burnett
Get Even More From Bustle — Sign Up For The Newsletter