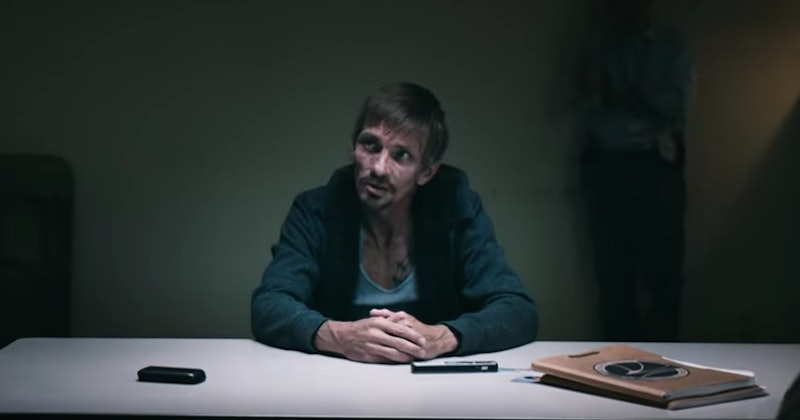 It's been six years since the finale of Breaking Bad aired on AMC and Walter White freed his longtime partner from Nazi captors, leaving an open end to the young cook's story. Now, creator Vince Gilligan is finally ready to address all of fans' unanswered questions in Netflix's Breaking Bad movie. On October 11, Netflix will release the original Breaking Bad film El Camino, in which Jesse Pinkman will finally get the ending he deserves. Well, hopefully. Mostly, the first Breaking Bad movie teaser will leave you asking where is Jesse?

The official description for the film doesn't provide much insight, and although it's captivating, neither does the 70 second trailer. "In the wake of his dramatic escape from captivity," the description reads. "Jesse must come to terms with his past in order to forge some kind of future." The last time fans saw Jesse, he fled the scene of Walter White's death in, you guessed it, his El Camino. Pinkman, played by the now iconic and well-decorated actor Aaron Paul, doesn't appear in the trailer. But he's definitely the dialogue's main focus.

The clip stars Pinkman's loyal bud Skinny Pete, sans-beanie, who, over five seasons of Breaking Bad, watched the duo's drug-dealing and cooking evolution unfold. (And sometimes even helped.) He's interrogated under the familiar buzz of fluorescent lighting, and photos of late Agents Schrader and Gomez hang in the background.

"I have no idea where he is," Pete says. "I don't know where he's headed either ... but yo, even if I did, I wouldn't tell you, 'cause I've been watchin' the news same as everybody else. I seen that little cage of his they kept him in ... no way am I helping you people put Jesse Pinkman back inside a cage."

It's not totally clear how far in the future this scene takes place compared to Jesse's original escape, but fans speculate it's not long. Pete's final Breaking Bad appearance took place when Walt hired him as a fake hit-man to intimidate his ex-business partners and rivals into transferring cash to his family. "This scene has got to be close after Jesse broke out, so it's close after Pete and Badger played 'the two best hitmen west of the Mississippi,'" Ignorantsportsguy wrote on Reddit. "The cops probably don't know anything about that, although Pete and Badger probably spent their fat stack on the blue stuff right after leaving Walt, and there'd be a trail there."

Most of the characters fans got to know during Breaking Bad were killed by the show's end — or at least are assumed dead. It will be interesting to see who carries El Camino alongside Pinkman. Where there's Skinny Pete, there's probably the aloof follower Badger, and Saul Goodman and Walt's wife Skyler are bound to show up as well.

In an a new interview with The New York Times, Paul confessed his excitement to revisit Pinkman's character when Gilligan presented the opportunity. "I couldn’t speak for a good 30, 60 seconds," he said. "I was just lost in my thoughts. As the guy who played the guy, I was so happy that Vince wanted to take me on this journey."

Since Breaking Bad's 2013 finale, the show's fan base has grown immensely thanks to its availability on Netflix. So, a Netflix original film (and a tequila collaboration) is the perfect way to end the "blue meth" era.

More like this
What's New On Netflix: A Third '365 Days' Movie & Lili Reinhart’s New Film
By Arya Roshanian
What’s New On Netflix: 'Never Have I Ever' & 'Indian Matchmaking' Return
By Arya Roshanian
Fabien Frankel Has History With 'Game Of Thrones' Emilia Clarke
By Sam Ramsden
Everything To Know About The HBO Max & Discovery+ Streaming Service Merger
By Brad Witter
Get Even More From Bustle — Sign Up For The Newsletter