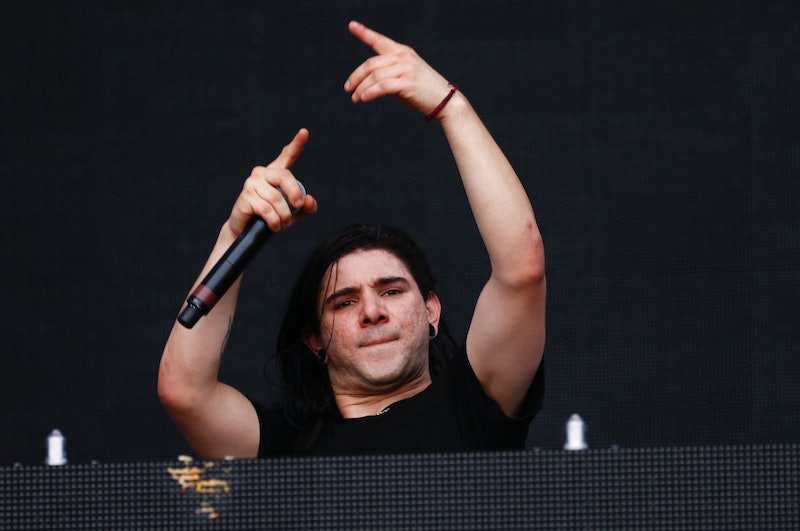 Anyone who has been anywhere even remotely sunny knows what it's like to get nipped by a mosquito. Over the years, countless natural and not-so-natural remedies have been suggested. Taking special vitamins didn't seem to work for me. Nor did the citronella candles, the lotions and potions, or the spray that smells a little funky. But, guys, huge news: your playlist might be the best solution of all. A study has shown music by Skrillex might protect you from mosquito bites.

OK what? I know this sounds bonkers, but I promise this isn't an April fools hangover. In fact, it might be worth giving a go.

As Live Science reports, the team behind the study — a group of international scientists specialising in mosquitoes and the diseases they carry — wanted to carry out the experiment to "test whether loud music could be used to manipulate mosquito behaviour." According to the BBC, the team said that sound is "crucial for reproduction, survival, and population maintenance of many animals. In insects, low-frequency vibrations facilitate sexual interactions, whereas noise disrupts the perception of signals from conspecifics [members of the same species] and hosts."

So, these scientists decided to subject adults of the Aedes aegypti species (known better as the yellow fever mosquito) to electronic music — specifically "Scary Monsters And Nice Sprites" by Skrillex. According to the BBC, this track was "chosen because of its mix of very high and very low frequencies," and the research team said "[i]n insects, low-frequency vibrations facilitate sexual interactions, whereas noise disrupts the perception of signals from conspecifics [members of the same species] and hosts."

The results, which were shared in science journal Acta Tropica, were pretty surprising.

The team found that the female mosquitos (aka the ones who bite you) seemed to, well, enjoy Skrillex's music. The BBC writes that the insects were "entertained" by the track, and "attacked hosts later and less often than those in a dubstep-free environment." The scientists reportedly said: "[T]he occurrence of blood feeding activity was lower when music was being played."

In addition, the scientists found that "Scary Monsters And Nice Sprites" seemed to, erm, kill the mood for the mosquitos. Yes, science has proven that when dubstep is on blast, mosquitos get it on "far less often," according to the BBC. Simply because the lady mosquitos were far too busy wilding out. Wow, the mental image of female mosquitos being the last on the dance floor is overwhelming RN.

Like most early-stage research, a great deal more in-depth experimenting needs to be done before we can know anything for sure. But signs point towards this little nugget of information paving the way for music/sound to be used to fend off those dastardly bugs. As the study's abstract points out:

"The observation that such music can delay host attack, reduce blood feeding, and disrupt mating provides new avenues for the development of music-based personal protective and control measures against Aedes-borne diseases."

I guess this news isn't only great for those trying to ward off mosquitos, but also for Skrillex. No doubt the dubstep performer is about to get booked in for a lot of festivals. Especially, I imagine, ones with hotter climates and near water.

More like this
The Queen’s Cause Of Death May Not Be Formally Announced
By Shahed Ezaydi and Catharina Cheung
Will Archie & Lilibet Attend The Queen's Funeral?
By Sam Ramsden
Twitter Bids An Emotional Farewell To Her Majesty The Queen
By Shahed Ezaydi
Will Kate Middleton Become The Princess Of Wales?
By Emma Carey
Get The Very Best Of Bustle/UK