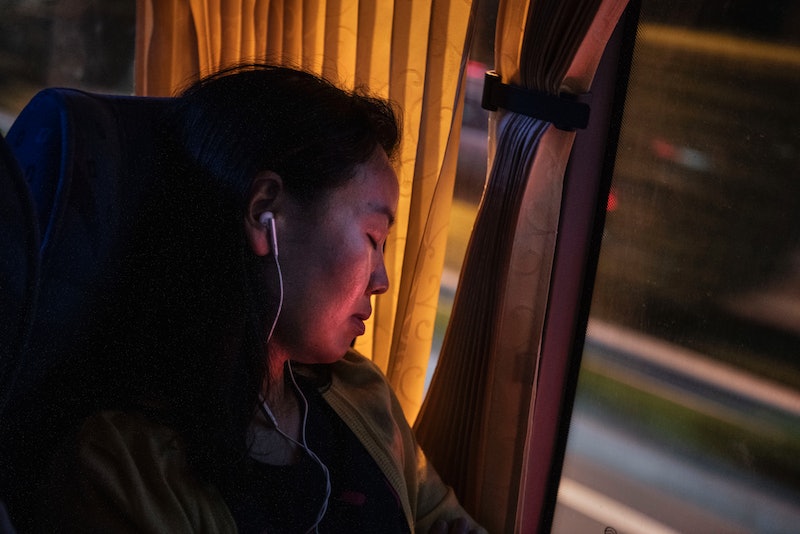 Regardless of your genetic disposition or any cardiovascular health risks you may or may not have, a new study says that the right amount of sleep can vastly improve your heart health. The Centers for Disease Control and Prevention (CDC) has long cautioned that not getting enough sleep can increase heart health complications. But now, scientists are suggesting that too much sleep might also harm your heart health. But never fear: there is a sweet spot. Sleeping between six and nine hours a night will help your heart health most, the new study concluded.

Published in the Journal of the American College of Cardiology, the study examined the self-reported sleep habits, genetic information, and medical records of nearly half a million participants. These participants were volunteers whose information was kept with the UK Biobank, and they were ages 40-69 and had never had a heart attack. The study followed these participants for seven years.

In line with the CDC's cautions about the need to get enough sleep to promote long-term health, the study found that participants who regularly slept for less than six hours per night were 20% more likely to have a heart attack than those who slept between six to nine hours a night. But the part that may surprise you is what the study found about what happens to heart health when you sleep a lot.

Participants who slept for more than nine hours per night were 34% more likely to have a heart attack than people sleeping within the optimal six to nine hour range. And the numbers got more discouraging the greater participants strayed from the six to nine hour range. Getting closer to five hours of sleep per night increased participants' heart attack risk by 52%. And getting closer to 10 hours per night increased the odds by about half, as well.

But it's not all bad news. The study also found that sleep can be a vitally important key to ensuring heart health for people who are predisposed to developing heart conditions. Because when participants with genetic predisposition to heart disease slept between six and nine hours a night, they were 18% less likely to have a heart attack.

This finding is especially important given the racial disparities in heart health treatment and fatalities in the United States. According to the American Heart Association, women of color, especially Black women, receive poorer heart health care than white women. According to a 2017 study published in The Journal of Clinical Hypertension, structural issues like income and insurance disparities and clinicians untrained in cultural competency contributed prevent effective treatment of Black people in need of heart health care.

Where does sleep factor into this? According to a 2016 study published in the Journal of Anxiety Disorders, Black Americans are more likely than white Americans to sleep less due to anxiety. So this new Journal of the American College of Cardiology offers a new approach to reducing heart disease risk in medically marginalized populations.

By emphasizing a sweet spot of sleep that can reduce heart attack risks, the new study suggests a way that people can take more multi-faceted approaches to improving heart health on their own. So even if you currently lack access to the medical care you deserve, you can still work to improve your heart health through sleep.