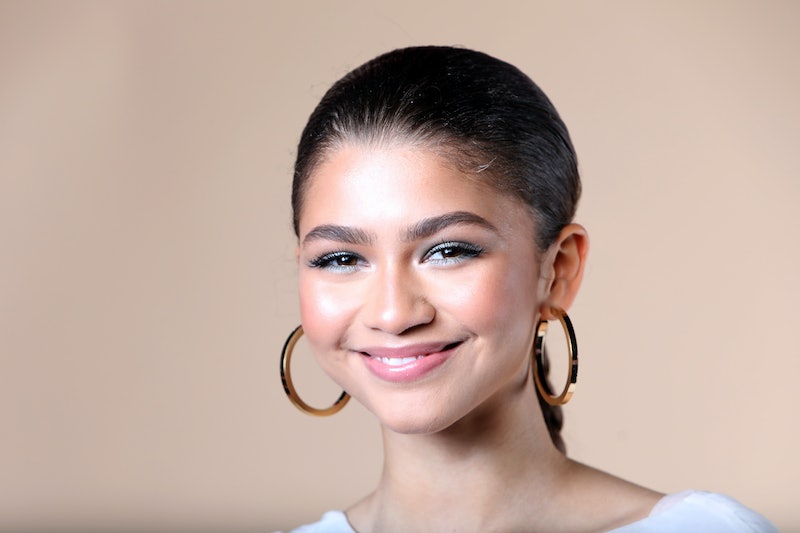 Considering how major a celebrity Zendaya is, it's understandable that social media plays a big part in her life. The 22-year-old has 52.6 million followers on Instagram, on which she posts photos a few times a week, and she's active on Twitter, as well. Yet while talking over the phone with Bustle, the singer/actor/activist reveals that she actually spends a good amount of time without her phone — and you might want to use Zendaya's trick for not getting sucked into a social media hole for yourself.

"I just don’t even bring my phone so I can stay in my work zone and not worry about it at all," says the star, who voices a character and contributed to the soundtrack for the new movie Smallfoot, out Sept. 28.

That might sound simple, but it's actually a solid trick. Who says that you should keep your phone on you 24/7? Zendaya certainly doesn't, but Smallfoot's main human character, Percy (James Corden), has an obsession with social media fame and going viral online — so much so that he risks his life by filming giant yetis, or bigfoots. While Zendaya says she empathizes with Percy, she adds that she manages to avoid getting caught in that world as much as possible.

"I can definitely say I use [social media] on a daily basis, but I definitely think it’s important to enjoy it but also enjoy real life too," she explains. "Be able to know when you can take a break or should take a break and be comfortable with yourself when your phone isn’t involved in the equation. So it’s all about a balance."

Even if you don't have millions of followers like Zendaya, you probably still feel the need to keep up with your smartphone a bit too often, which the actor understands. "Everybody I think nowadays can understand the pressure of having to keep up with social media, and I love social media for sure... It’s part of my job to have that part of my life [and] I definitely appreciate all my fans and I like that I can connect and be a part of their lives," she says. "You have to do what’s best for you, and again like I said, it’s all about balance. Are you able to have your social media life and your real life and are you able to be happy with both?"

It shouldn't be a surprise to any of Zendaya's fans that she likes to question the status quo in this way; the actor has always been outspoken when it comes to issues she deems important. In fact, her inquisitiveness is what initially made her want to voice Meechee in Smallfoot. "[Meechee is] definitely curious. I would like to say that I’m curious, I definitely have a want for knowledge and to learn more and just in general have an open mind to things, I think that’s definitely everything she’s about," Zendaya says.

In Smallfoot, two species, separated by thousands of feet in altitude, don't believe that the other exists. On the top of the mountains live the Bigfoot, and down below are the humans, aka the Smallfoot. Meechee leads a group of conspiracy theorist-like members called the SES, or "Smallfoot exists, suckers." Nobody else but Meechee and her crew believe that humans are real, though, and, well, you know how most people feel about the existence of Bigfoot in real life.

Like Meechee, however, Zendaya chooses not to simply take commonly accepted knowledge as an end-all-be-all. "I’m one of those people that tries to learn as much as they can, and even if I don’t know about a subject, I don’t want to speak on something I don’t know about, so I ask questions," she says. "It’s important to ask questions, it’s important to understand more. I think understanding is the first key to really having true respect for other people."

Smallfoot can serve as an allegory for the truths available to those who seek them, or it might serve as a cautionary tale. "I think sometimes living in ignorance can be a very dangerous thing," Zendaya says, adding, "The message that I choose to gather from the movie is if you feel in your heart that there’s a truth, then you need to go out and search for those answers."

If nothing else, the new animated movie will inspire you to go out and question things about the world rather than sitting at home and scrolling through social media all day — and Zendaya would most certainly approve.