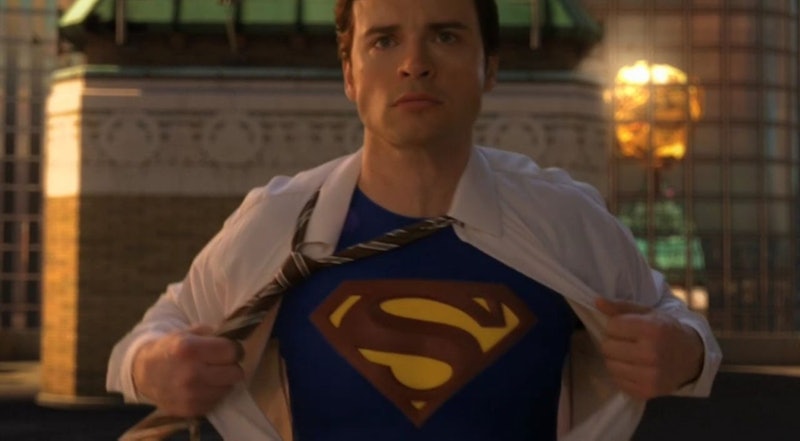 Cue Remy Zero's "Save Me," because in an announcement fans had hoped for, The CW confirmed that Smallville's Tom Welling will play Superman again in the Arrowverse "Crisis on Infinite Earths" crossover. The major news dropped on Thursday and fans can hardly contain their excitement over Welling once again playing Superman, aka Clark Kent, just like he did for 10 seasons.

According to TVLine, The CW crossover will "reveal what happened to Clark Kent almost ten years" since Smallville's series finale in 2010. Arrow executive producer Marc Guggenheim said in a statement about Welling's guest-starring gig, "For eight years, Arrow has stood on the shoulders of Smallville. Simply put, there would be no Arrow, and no Arrowverse, without it. So when we first started talking about 'Crisis on Infinite Earths,' our first, second and third priorities were getting Tom to reprise his iconic role as Clark Kent. To say that we’re thrilled would be a Superman-sized understatement."

Even Arrow's Stephen Amell is thrilled. He tweeted on Thursday, "There’d be no crossover without Tom Welling. So Tom Welling is in the crossover." He also shared a gif of Will Ferrell as Anchorman's Ron Burgundy saying, "It's science." Amell is absolutely right.

As Smallville fans know, Welling started the show playing a young Clark Kent/Superman and was only ever seen wearing the superhero's famous outfit once — in the series finale. The very last episode of the drama also finally showed Clark flying as Superman. So, to see what happened to Welling's character after all these years is beyond exciting. Welling has yet to speak about this latest casting news, but he previously stated that he wanted to try different roles compared to his Smallville character.

In an August 2017 interview with Entertainment Weekly discussing his Lucifer role, Welling said about his Smallville days, "I definitely didn’t want to play Clark Kent again. The great thing about Clark is he didn’t know who he was and he didn’t know what he was supposed to do with what he had and his abilities." Regarding his character on Lucifer, Welling continued, "This character very much knows what he’s capable of and knows what he wants to do and knows how to do it, so as much fun as that is to play, it wasn’t necessarily because of Clark that I chose this character. It was so many more factors than just, 'I don’t want play Clark again,' but I’d be lying if I was saying that I do not enjoy playing something very different for sure."

And, Welling won't be the only Superman making an appearance in the crossover. Both Tyler Hoechlin and Brandon Routh will reprise their Man of Steel roles. Hoechlin has played Superman in a handful of episodes of The CW's Supergirl, and Routh played the superhero in 2006's Superman Returns. But not all of them will be playing the same red and blue outfit. It was revealed at Comic-Con that Routh's character will wear a suit based on Alex Ross' Kingdom Come design. And previous reports stated that Hoechlin and Routh's Supermen will be from different time periods. As for Welling's Superman, details remain scarce.

The crossover begins on Monday, Dec. 8 with Supergirl and continues with Batwoman on Sunday, Dec. 9 and The Flash on Tuesday, Dec. 10. Then, after a break for the holidays, the crossover will conclude on Tuesday, Jan. 14 on both Arrow and DC's Legends of Tomorrow. Welling's return definitely makes the crossover even better. Here's hoping fans will once again get to see him fly in his famous tights and cape.