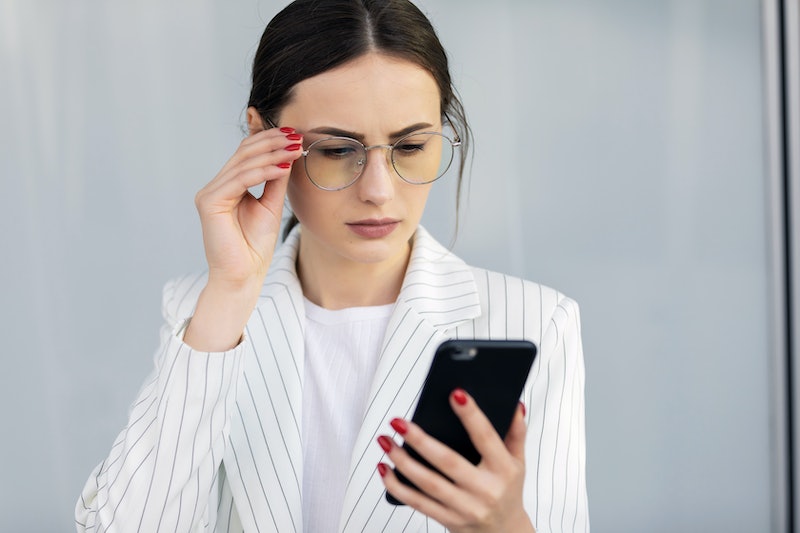 It's tricky, sometimes, to talk about excessive phone use for fear of sounding like a Luddite. But is smartphone addiction real? At the very least, phones play a greater role in our daily lives than ever before, as a new study by AO-Mobile indicates. The survey of 2,000 smartphone owners found that seven out of 10 people "can't bear to be away" from their phones, as the Independent reports, while 60 percent of participants described themselves as "too reliant" on them.

Phone addiction has become such a widespread problem that there's a specially-coined term for it — nomophobia, derived from NO MObile PHOne phoBIA, as CNN reports. There's even a 20 question quiz to determine whether you have it, designed by human computer interaction expert Caglar Yildirim, which asks you to rate how strongly you agree with statements like, "Running out of battery in my smartphone would scare me," and, "If I did not have my smartphone with me, I would feel weird because I would not know what to do."

And it's not an issue to laugh off, either. Yildirim told CNN that those who score highly on his quiz might see their phone use negatively impact their social life, their mental health, or their work life, advising, "If any of this applies to you, then it's time to start looking at your behaviour and level of anxiety."

There's also the problem of drivers using phones behind the wheel — according to CNN, almost half of adults in the U.S. admitted to reading or sending a text while driving in a 2010 study. Non-drivers aren't off the hook either, with a 2013 study revealing a "tenfold increase in injuries related to pedestrians using cell phones from 2005 to 2010." Oh, and excessive phone use can also lead to "text neck," bad posture, and poor sleep caused by disrupted production of melatonin. (Read the whole article if you really need scaring into putting your phone down.)

So now you're utterly terrified: what can you actually do about the matter? Well, you could start out with an app designed to tackle phone addiction — one like Hold, for instance, which gives you points to get free stuff the longer you stay off your phone, or something like Flipd, which locks you out of all but your phone's most basic functions after a certain amount of usage.

You could also make tweaks to your phone, as CNBC recommends, moving tempting apps off your home screen and into labyrinthine folders, or turning on grayscale to make your screen less visually enticing. Turning off non-essential push notifications could help, too.

And there's behavioural changes that can help, too. Invest in an old-fashioned alarm clock instead of using your phone alarm, as the Guardian suggests — or better still, ban your phone from your bedroom altogether. Even forcing yourself to be a little more aware of what, exactly, is motivating you to reach for your phone could make a difference. "Ask yourself before you pick up your phone: 'Why am I doing this?'" the Guardian advises. "Admit to yourself that the answer is: 'I am bored during this seven-second lift journey,' and you may reconsider."

More like this
This Wordle Rival Is Taking Social Media By Storm
By Sam Ramsden
This Is When Netflix Is Going To Start Charging You For Sharing Passwords
By Darshita Goyal
Pret & Costa’s Coffee Is The Strongest On The High Street, According To Which?
By Sam Ramsden
Here’s What TikTok's "Mascara” Trend Is *Really* About
By El Hunt
Get The Very Best Of Bustle/UK
Sign up for Bustle UK's twice-weekly newsletter, featuring the latest must-watch TV, moving personal stories, and expert advice on the hottest viral buys.