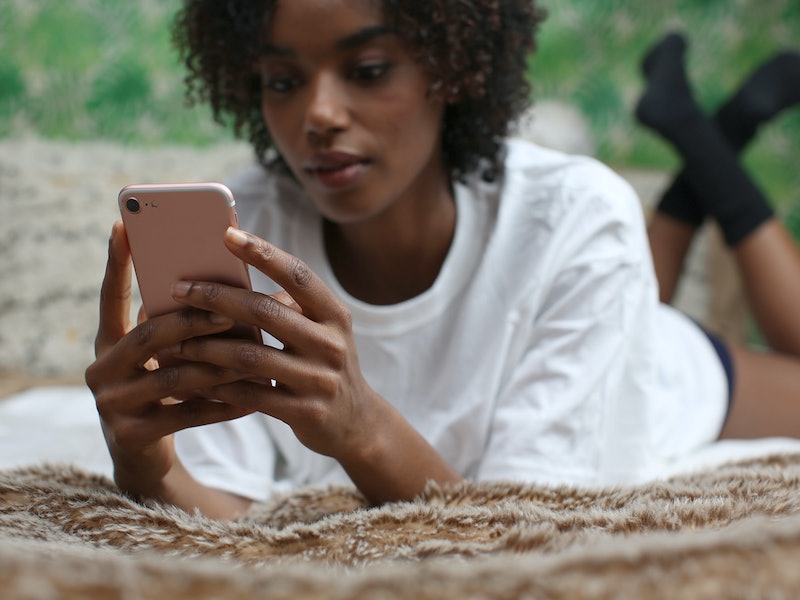 When you're having a bad day, what does your self-care routine look like? If it involves using your cell phone to distract yourself, you aren't alone — but new research has shown just how your mood affects smartphone usage, and how that behavior could be problematic. According to a study from researchers at the University of Derby and Nottingham Trent University in the UK, emotional stability was linked to smartphone use, and the potential effects aren't good. The research team surveyed 640 people ranging from 13 to 69 years old online, and they found that people are more likely to use their cell phones if they're feeling anxious. But on top of that, people with mental health issues are more likely to view their phones as a form of therapy, which increases cell phone usage.

“Our research does show that some applications such as the use of social networking sites, do appear to be problematic for a small minority of individuals,” said study co-author Mark Griffiths, a professor who specializes in behavioral addiction at Nottingham Trent University, in a press release. Basically, the you're more likely to overuse your cell phone when you're already feeling bad, which can lead to adverse effects.

Dr. Zaheer Hussain, who also co-authored the study and is a lecturer in psychology at the University of Derby, said in the press release that it can be difficult to determine the necessity of smartphone usage when you're feeling emotionally unstable. "Smartphone use has become a necessity in the lives of many individuals," he said. "Problematic smartphone use is more complex than previously thought and our research has highlighted the interplay of various psychological factors in the study of smartphone use," such as emotional instability. "In our study we found being less emotionally stable was associated with problematic smartphone behaviour [sic]," he said. "This is because people may be experiencing problems in their lives such as stress, anxiety, depression, family problems, so in that state they are emotionally unstable, meaning they may seek respite in very excessive smartphone use. This is worrying."

It also depends on what you're doing when you use your phone. Calling a friend is probably going to have a better effect on you than just scrolling through social media, according to Hussain. “They may be engaging in passive social network use, this is where you spend a lot of time on Facebook, Twitter, Instagram, browsing other peoples’ comments, pictures and posts, and not posting anything of your own and not engaging in discussion with others, so there is no real positive social interaction while social networking,” he said in the release.

Smartphone usage has been shown to make us more anxious, which can create a negative cycle of anxiety. If you use your phone more frequently when you're feeling anxious, your phone can increase those feelings. Obviously, most of us aren't going to stop using our phones anytime soon, so how do you mitigate the side effects? The study found that almost half of people are on social media when they're using their phones, so it can't hurt to be mindful of your time spent liking Instagram posts or watching YouTube videos. You can also try taking breaks from your phone, like sleeping with your phone in another room or putting it down while at the dinner table. It's also a good idea to be mindful of how you cope when you feel overwhelmed and whether you can change up your self-care routine to make it less phone-focused. I'm an admitted smartphone over-user, and this is just a reminder that it can sometimes affect me in weird ways.