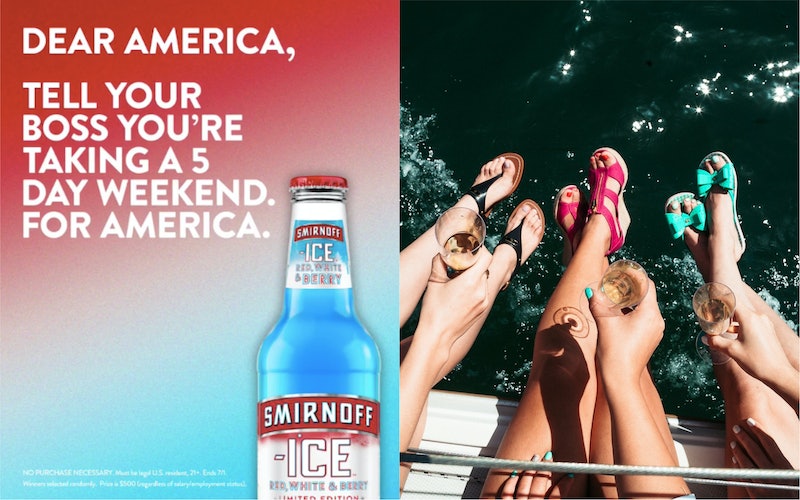 It's hard to believe, but the biggest holiday of the summer is NEXT. WEEK. Ten days from now, the Fourth of July will mark summer's informal midpoint. So, perhaps it's only fitting the middle of the season also falls in the middle of the week. Yes, Independence Day is on a Wednesday this year, so don't plan on making a long weekend out of the occasion. But, wouldn't it be nice if someone was willing to help you turn July 4 into a weeklong occasion? Smirnoff's Fourth of July contest could make it possible.

Here's how it works: you can enter Smirnoff's contest by commenting on either their Facebook, Twitter, or Instagram contest post with what you would rather be doing than working in your office during the holiday weekend. One hundred winners will be randomly selected and each receive $500. So, it's basically like Smirnoff is paying you to take an extra two days of vacation with no strings attached. The only rules re that you need to pre-approve the time off with your boss (Smirnoff isn't gonna call your office) and naturally, you have to be 21 or over.

Smirnoff understands the party potential of the Fourth of July. The iconic line of spirits even makes a patriotic, red, white, and berry flavor vodka. The vodka, per the Smirnof website, "...has the cooling taste of Cherry, Citrus and Sweet Blue Raspberry flavors all combined for a refreshingly delicious taste of freedom." Your jell-o shots will never be the same.

On the decision to kick off an Independence Day contest, Smirnoff Ice Brand Director Krista Kiisk explains, "I think we can all agree that Wednesday isn’t enough time to celebrate America’s birthday. Who wants to head back to work and do work things when you could be on a beach, on a boat or on a mountain celebrating the good ole US of A?"

If you're looking for less colorful options for drinking your way through July fourth, rest assured there are plenty of new and fun drinks for you, too. Some of them even come allow you to do some good while you sip. craft breweries from around the country are partnering with the American Civil Liberties Union for the creation of People Power Beer.

The ACLU’s grassroots movement of the same name served as central inspiration for the beverage. The ACLU’s People Power works with volunteers and activists across the country to bring change and fight for equality at every sociopolitical level. “This idea inspired many of the nation's craft brewers to create their own interpretation of People Power Beer, in support of the ACLU and their essential work,” states the People Power Beer website.

Josh Stylman, co-founder of Threes Brewing in Brooklyn, spearheaded the idea and recruited almost 30 craft breweries across the country to be part of the project. In an interview with Food and Wine, Stylman says the project is a shared effort, “co-owned by every brewery that signs on…We’ve been so excited to see such enthusiasm from other breweries, and we hope that they’ll each take up the idea and run with it, to create whatever brews (as well as supporting events, activations etc.) they’d like in support of the ACLU,” he added.

Highland Park Brewery in Los Angeles, Hopewell Brewing Co. in Chicago, Cloudburst Brewing in Seattle, and Three Stars Brewing in Washington, DC, in addition to Threes Brewing in NYC, are a few of the breweries joining the movement. Participating breweries have pledged to serve People Power Beer between July 4th and Election Day on November 6th. Ten percent of all sales will go to the ACLU.

Be sure to enter Smirnoff's contest by July first for a chance to win an extra long July fourth weekend. But even if you can only celebrate for one day, you have lots of options to makes it extra refreshing.