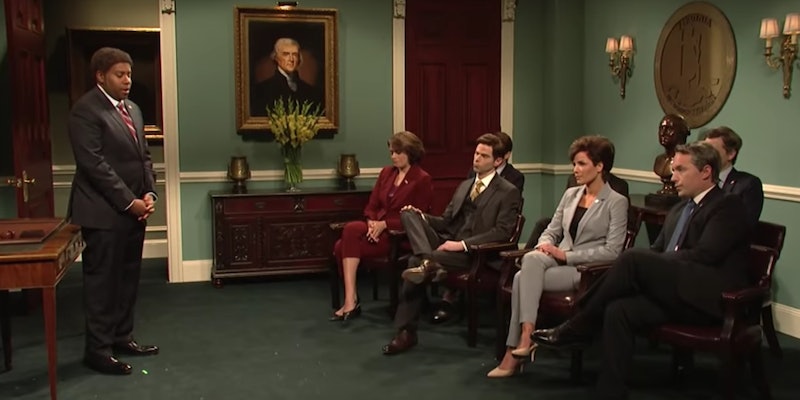 Never one to miss out on satirizing a political scandal, Saturday Night Live took on Virginia politicians' blackface controversy in a skit heartily mocking some of the more clueless attitudes out there. The skit comes after two of Virginia's top three elected state officials have admitted to once wearing blackface. Despite mounting public condemnation, they have so far refused to resign.

As the skit opens, SNL cast member Kenan Thompson stands before seven of his white colleagues, all of whom are playing Virginia politicians. "It's extremely embarrassing to the state," Thompson, acting as the chairman of Virginia's state ethics committee, said of the revelation that two white state leaders had worn blackface while in college. "And as chair of the ethics committee, I have to ask: has anybody else worn blackface in college?"

Sheepishly, the politicians began to raise a number of questions, looking for a justification for their past transgressions. "What if the blackface was just part of your costume of a black person?" one state lawmaker asked. "What if you wore the blackface as a tribute, like an homage to your hero?" another asked. "Does it count if you did it all the way back in the 80s?" one official asked.

"Of course not," another state legislator quipped. "It was funny and cool in the 80s."

Cue an exasperated Thompson. "I'm going to stop you right there, Phil," his character said. "It does still count, and it was never funny or cool."

The questions continued, becoming increasingly more inane. "What if you were just goofing around with your friends?" one official asked. "But what if your costume [of a black person] won a contest?" another asked. "But what if I wear blackface for a costume of a black woman?" one of the female politicians asked.

Earlier this month, a photo depicting two people — one wearing blackface, the other concealed under a Ku Klux Klan robe — at a social gathering surfaced on a page dedicated to Virginia Gov. Ralph Northam in the 1984 Eastern Virginia Medical School yearbook. While Northam had at first admitted to appearing in the photo, he later retracted that statement and said he had not been aware of the yearbook page or photo until it had been made public. But the Virginia governor did admit to having worn blackface once in the 1980s while dressed up as singer Michael Jackson.

A few days later, Virginia Attorney General Mark Herring, who had initially issued a harsh condemnation of Northam when the yearbook photo first surfaced, admitted that he too had worn blackface in the 1980s. Herring said he'd darkened his skin when he and some friends dressed as rappers. As of Sunday morning, neither men had resigned despite multiple calls from constituents, Republicans, and fellow Democratic state leaders to do so.