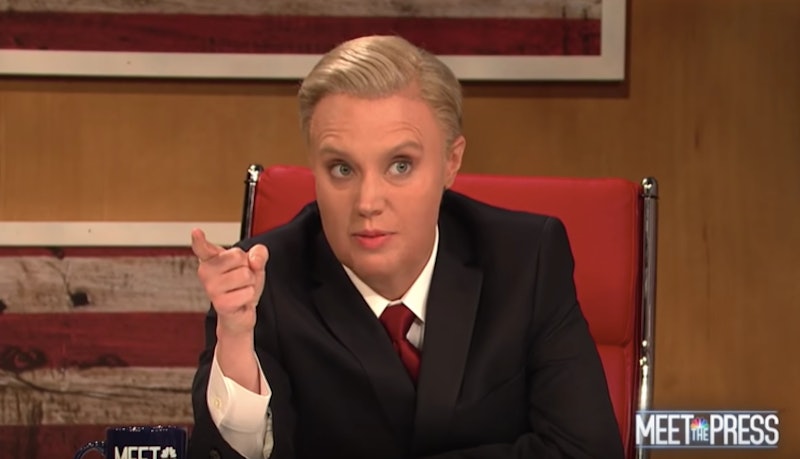 The cast of Saturday Night Live teased three of the Senate's best known Republicans and Chuck Todd of NBC's Meet The Press on Saturday to explore one simple question: What would it take for President Donald Trump to lose their support? The SNL cold open mocked Republicans' unwavering support for Trump — even in the face of some hard-to-believe hypothetical scenarios.

Kyle Mooney as Chuck Todd interviewed Cecily Strong as Sen. Susan Collins, Beck Bennett as Senate Majority Leader Mitch McConnell, and Kate McKinnon as Sen. Lindsey Graham. Mooney's Todd started things off by noting that the three senators were supporting Trump's tariffs on China — a departure from their past positions. "You all have opposed tariffs in the past; do you all support the president's tariffs now?"

"Well, Chuck, there's a simple answer to that," Bennett's McConnell answered. "There was no collusion."

After Mooney's Todd tried to redirect back to China, McKinnon's Graham went a different direction with Trump's business record.

"Listen, Chuck, when you have a president who's a financial genius and a business Jesus like Donald Trump, you've just got to trust him," McKinnon's Graham said. "This man has lost a 100 times more money than I've ever made."

Pressed further about Graham's 180 on President Trump, McKinnon replied, "I am a man of convictions and principles — unless he can help me and then it's, 'New Lindsey, who dis?'"

Mooney's Todd then asked Strong's Collins about Trump "unilaterally doing what he wants" as president. "Chuck, I'll be the first to admit that some of the things this administration is doing makes me want to shake my head vigorously and wag my finger once — perhaps twice."

Mooney's Todd then went through a number of hypothetical scenarios. The first hypothetical: that Special Counsel Robert Mueller testifies in Congress that Trump obstructed justice.

"The beset way to uphold the law is to be above it, Chuck," McKinnon's Graham responded.

Scenario two: that Trump colluded with the Russians. Strong's Collins responded first. "I'd have to write a strongly worded email and send it straight to my draft folder," she said.

Other scenarios: that the president isn't religious, that he isn't Christian, or that he divorced his wife Melania — and left her for Stormy Daniels, Kathy Griffin, or Rep. Alexandria Ocasio-Cortez. The AOC option they all objected to, though still said it would not cause them to pull their support — even if Trump enacted the Green New Deal.

"Let's say Trump open hand slaps you in the face," Mooney's Todd proposed next. "What would you say then?"

"Harder, Daddy," McKinnon's Graham said back, not skipping a beat.

Mooney's Todd then said that it seemed there's nothing that could change their opinion — but the SNL Republicans disagreed. Bennett's McConnell proposed perhaps if Trump got "gay married" and McKinnon's Graham added that the marriage was to the leader of ISIS.

"And they had matching diapers fashioned out of the original Constitution," Strong's Collins pitched in.

"Well then maybe," Bennett's McConnell offered about their scenario before giving in. "Who are we kidding?" he said. "We'll always be ride or die b*tches."

For a few more laughs, and details on the other scenarios, you'll have to watch the entire cold open yourself.