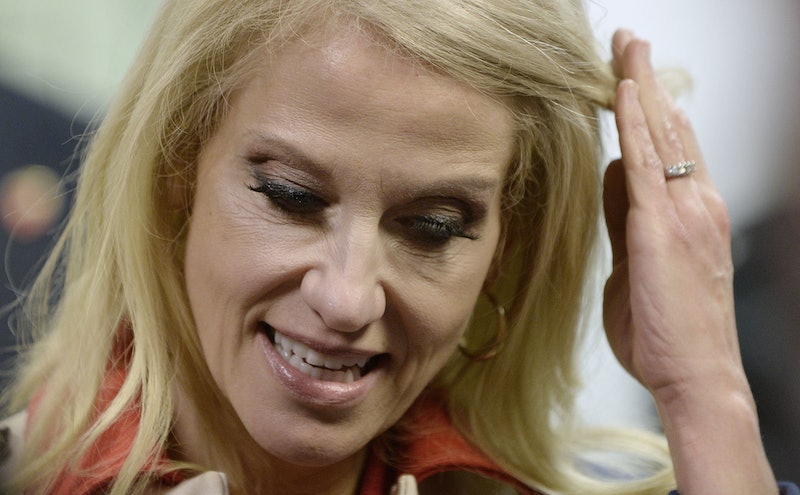 After another week of their ongoing and escalating media feud, Saturday Night Live parodied Kellyanne Conway and Jake Tapper's relationship in a hilarious Fatal Attraction sketch. The clip starts with Tapper, played by cast member Beck Bennett, citing credibility issues for not having Conway on his CNN show State of the Union (which did actually happen this week). As Tapper heads home for the day, he returns to his apartment to find a scantily clad Conway, Kate McKinnon back for another round of her uncanny impression, trying to seduce him into letting her back on the news.

The real-life feud mirroring the sketch has been evolving for a few weeks now, but was most recently incited by Conway's claims about the Bowling Green Massacre, an alleged shooting by immigrant terrorists that never occurred. The New York Times then reported that the White House had offered Conway for the Sunday news shows, but CNN passed because of her multiple disproven claims. Conway refuted the claim, taking to Twitter to say she had family obligations that prevented her from appearance, but CNN's public relations account responded to the tweet to shut down Conway's claim. "[Conway] was offered to SOTU on Sunday by the White House. We passed. Those are the facts," CNN tweeted.

All this happened before Conway went on air and allegedly broke federal ethics laws by promoting Ivanka Trump's clothing line, which Nordstrom officially pulled from its stores last week. The brand's profits were suffering as far back as October, presumably from people boycotting it in response to her father's campaign. However, that didn't stop both Conway and Donald Trump from crying foul and accusing the company of unfair treatment. Conway will probably have a really difficult time reestablishing her credibility with the press now, and SNL's spot-on parody isn't going to help her.

The whole situation is so ridiculous that it makes perfect sense for an SNL skit, and the show knocked it out of the park. Conway is often portrayed as a kind of hapless woman who fell into her position of power, but nobody gets to be a senior advisor to the president just by chance. Showing her as a calculating power player feels more true to reality, and McKinnon (as usual) played it perfectly. The show keeps proving that it's handling this strange new era of politics with humor and insight, and just keeps getting better with time. Season 42 is a small but welcome contingency prize for having to deal with a Trump presidency.