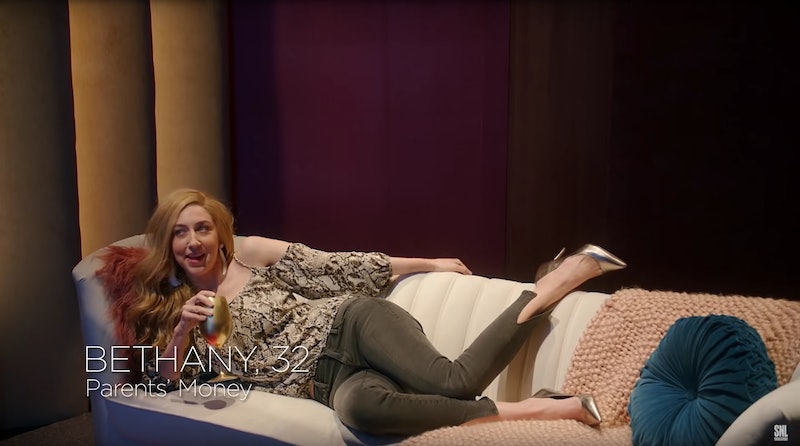 Netflix's new reality TV series seemed destined for parody, and on Sunday, Saturday Night Live shared a spoof of Love Is Blind in a sketch that was cut for time. Love Is Blind, which premiered on Netflix on February 13, follows single adults through an an elaborate social-experiment in which individuals meet in secluded pods and get engaged without ever seeing the other. SNL used the same premise for the sketch titled "Love Is Blind: Quarantine Edition" with one twist — the contestants are quarantined due to the Coronavirus.

"Love is Blind: Quarantine Edition" stars several key SNL cast members, including Heidi Gardner as an "aspiring stay-at-home mom" who contracted the Coronavirus on a cruise, Chloe Fineman whose job description is just "attractive" (she got the illness by licking a pole), Ego Nwodim as a "picture-taker" who is looking to be a wife so she "won't have problems." SNL host John Mulaney also appeared in the sketch as well, starring as an extremely ill man named Dirk who is hooked up to an IV drip for the majority of the skit.

In addition to poking fun at the premise of Love Is Blind, the sketch also took aim at the streaming service on which the show airs. "You're watching Netflix," a voiceover said at the start of the bit. "We make movies too good for the theater, and now, reality shows too degrading for cable." The voiceover went on to describe the contestants, saying, "They all share something in common. Not only are they truly desperate to get married, they're also being quarantined because of exposure to the Coronavirus."

In the sketch, as the "stars" of the reality show get to know each other, nurses and doctors administer medication and workers in hazmat suits confiscate their contaminated glasses. The quarantined dating show, much like on Netflix's source-material, culminates with contestants meeting in person and a proposal. One more twist in the SNL sketch: upon meeting, the soon-to-be newlyweds are fumigated.

"Love is Blind: Quarantine Edition" was a standout from the episode, along with "Airport Sushi," the third installment of a series of musical sketches about how unclean certain spots in New York City can be. In April of 2018, SNL aired a similar sketch titled "Diner Lobster," which also starred Mulaney, spoofing the idea of ordering lobster at a New York City Diner with a musical medley inspired by Les Miserables. In 2019, "Bodega Bathroom" premiered during a Mulaney-hosted episode as well, bringing back the musical element.

From The Bachelor to Love Island, reality-shows about dating have proven to be rich material for SNL. Given the popularity of Love Is Blind, it was only a matter of time before SNL created a parody of the show worthy of its absurd premise.

More like this
Michael B. Jordan Tackled His "Public Breakup" With Lori Harvey On 'SNL'
By Brad Witter
The Black Lotus Staff Has "Had Enough" In The 'White Lotus' Spoof From 'SNL'
By Brad Witter
Who Is Pete Davidson Dating? He & Chase Sui Wonders Got Caught Kissing
By Jake Viswanath
'Love Is Blind: After The Altar' Season 3 Has A Release Date & It's Very Soon
By Grace Wehniainen
Get Even More From Bustle — Sign Up For The Newsletter
From hair trends to relationship advice, our daily newsletter has everything you need to sound like a person who’s on TikTok, even if you aren’t.