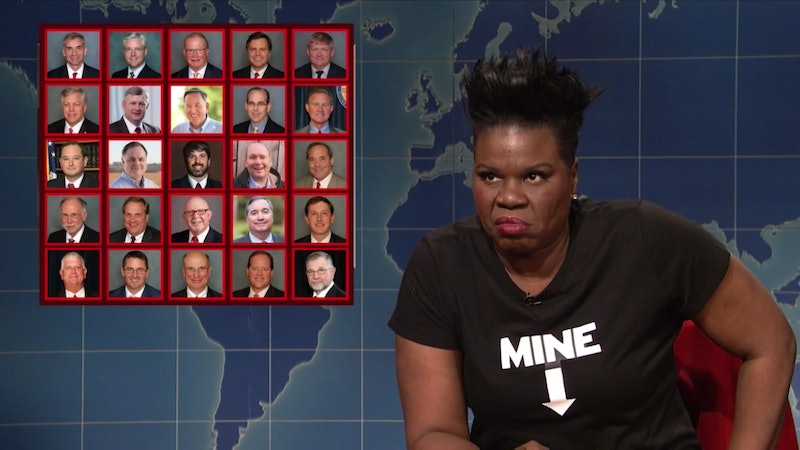 Alabama's complete abortion ban was a focus of Saturday Night Live on Saturday, coming up in both a skit that mocked The View and the weekly "Weekend Update" segment. In the last episode of the season, SNL's Leslie Jones forcefully criticized the abortion ban, calling it a war on women and yelling a Game of Thrones-inspired "Dracarys" to summarize her feelings.

Jones showed up behind the "Weekend Update" desk dressed as a handmaid from The Handmaid's Tale and declared that the abortion ban was just the beginning. "This is how it starts. I'm out living my life and then I see on the news that states are trying to ban abortion and tell me the things I can and can't do with my body," Jones said. "The next thing you know, I'm at Starbucks and they won't take my credit card because I'm a woman, instead of the regular reason, which is I don't have no money on it."

She took off the costume to reveal a T-shirt with the word "MINE" written above an arrow pointing downwards. "You can't control women because — I don't know if y'all heard but women are the same as humans," she said, "and I'm Leslie 'Dracarys' Jones."

Jones also criticized the Republican politicians who passed the ban in Alabama and showed their photos on screen. "This look like the casting call of a Lipitor commercial," Jones said. "This look like the mugshots of everyone arrested at a massage parlor. And if any of them had lips, I would tell them to kiss my entire a**."

"When women have a choice, women have freedom," Jones continued. "Look, the fact that nine states are doing this means this really is a war on women. And if you’re a woman out there and you feel scared or confused, just know that you’re not alone. There are so many women out there who’ve got your back, especially me."

The abortion ban also came up on a skit mocking The View's "Hot Topics" segment. "This week, Alabama passed a near total ban on abortion. So we 'bout to pop off," Jones, this time as Whoopi Goldberg, said.

The co-hosts took turns criticizing the ban, with Kate McKinnon's Joy Behar saying "the guys who passed this bill" are so worried about fetuses because they look like them. Melissa Villaseñor's Ana Navarro called it "backwards" and "regressive" again and again on a loop.

The main jokes, though, centered around Aidy Bryant’s Meghan McCain who defended the Republicans that passed the ban. "OK, can I talk now?” she asked. "OK, I am the only daughter at this table. So I have to say, these senators are actually very good and fun guys."

Abortion also came up in the cold open, when Kenan Thompson's Justice Clarence Thomas referenced the many states that have passed abortion bans of some sort in recent weeks. "We’ve got the votes now," Thompson as Thomas said. "Women are screwed." Anti-abortion activists have said they hope to bring a case before the Supreme Court that could overturn Roe v. Wade.

Jones — as herself or as Goldberg — won't have it.