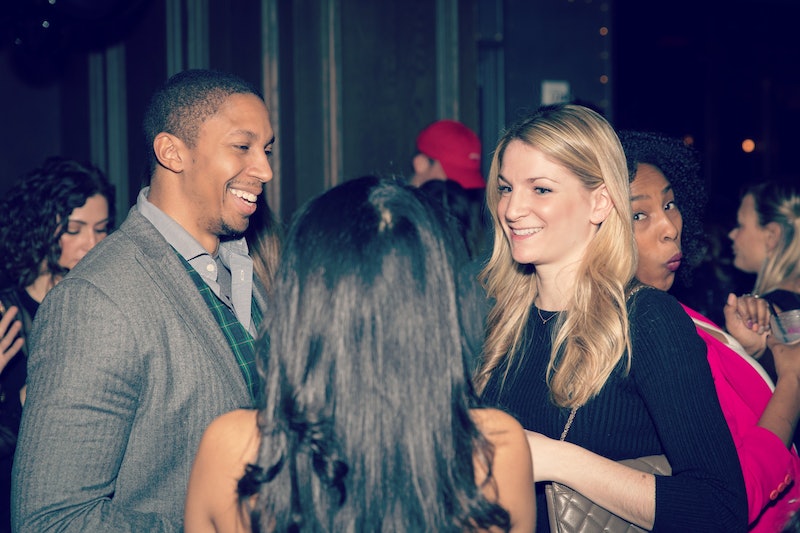 I point to a guy across the room but he's already talking to someone. She takes a good look at him, nods, and grabs my arm. We walk around for about 20 seconds and stop abruptly when we spot a guy coming out of the elevator.

I'm at the New York City launch party for Social Concierge, an invite-only dating club, at Fishbowl at Dream Midtown, a new (like hadn't even opened yet new) bar and founder Nana Wereko-Brobby just introduced me to a cute guy and then left us to another woman. The bar is hopping and sort of feels like a rich person's basement. There's a massive (and mesmerizing) fish tank in the center, which is surrounded with mingling twenty/thirtysomethings. There's a skeeball machine on one end, a bowling lane(!) on the other, and an interactive photo booth in the middle of the bar.

Social Concierge launched in London in 2011 as a way for eligible professionals in their 20s and 30s to meet at some of the hottest venues in town. In London, a membership costs $50/month and its highly-vetted members (they let in about 20-30 percent of applicants) are invited to an event every single weekend, often at London's members' only clubs. In New York, a membership will start off at $25/month for a cocktail party per month, and they'll be letting in 15-20 percent of applicants. The words "private", "exclusive", "invite-only" popped out to me on the website. My first thought? Wow, there's no way I'd get in to this. But Wereko-Brobby says there are some key differences between Social Concierge and other selective dating services.

Who Are The Members?

"We're not looking for finance d-bags," Wereko-Brobby says. "We're looking for well-educated, driven professionals, partly because that's naturally how the network grew up with Oxford and Cambridge grads," Wereko-Brobby says. "The second reason is that when I found I was matchmaking years ago, when I asked people what their type was, the first thing they'd say is 'driven', so that's the first thing we look for."

"We're looking for people you'd meet at a party and find fascinating and charming and interesting."

Each member needs to apply on the site, which takes about a minute or less and asks some basic questions (college, job), along with whether someone who's already in the club referred you, which helps fast-track you. You also have to upload a photo. "There's a degree of attractiveness," Wereko-Brobby says. "We want them to be relatively attractive, but we're not looking for the hottest people in new London and New York. We're looking for people you'd meet at a party and find fascinating and charming and interesting — that's the key thing. Unlike the dating apps, where looks are the key thing you have to go on, when you come to the party you might meet someone who is very photogenic but they don't give you the right vibes, so it does work better to try and focus in on their personality rather than the looks."

So how can they can they vet your personality? They also take a look at your Facebook and LinkedIn to see that you do interesting things and have an open mind.

Wereko-Brobby says Social Concierge appeals to two types of singles: ones who are at a point where they're serious about meeting someone (after all, they are paying a monthly fee) and think modern dating is pretty cringeworthy, or secondly, they're just getting back into the scene after a long-term relationship and need some confidence-building.

When Wereko-Brobby brought me around to meet a guy early in the night, she was acting as a mixologist. There are a bunch of them at the parties, and when you meet one, you'll definitely know. "We have these crowd mixologists," she says. "The idea is that we hire outrageously loud hosts, so it's different from being a party host. They'll say, 'Whats your name? Great! I'm going to introduce you to this person'."

Unlike other dating services, "dating", "love", and "relationship" are all left out of both the company's name and website. Instead, it's marketed as more of a social club where you can attend cocktail parties at trendy venues and oh, btw, everyone's eligible. On the site you'll see things like "a vetted crowd of eligibles" versus "find a relationship or " meet your soulmate".

So how is this different than just going to a cool new bar with your friends on thee weekends? For one, the ratio of males to females at these parties is 50:50. And while Social Concierge is LGBT-inclusive, if you're heterosexual and dating in NYC or London, you'll know that ratio is drastically different from the bar scene you're accustomed to, where straight women outnumber straight men.

Also, you'll have to leave your best wingwomen at at home — unless they're also in the club. Wereko-Brobby says members were allowed to bring a guest in the early days, but that led to friends sticking together and not meeting other members, so you have go to these parties solo. "Even if we pitched these as 'cool dating parties', you can't bring a friend," she says. "Sometime we get complaints from people saying it was awkward they had to walk to up to someone and make conversation, but that's the point."

I love this aspect of the party. Yes, it was uncomfortable at times, but having the mixologists there introducing you to people and knowing that everyone else there is in the same boat and ready to meet people provides a cushion that you don't have at a bar or party. Wereko-Brobby compares the parties to networking events. "I used to go to networking events alone and get dates from it all the time, and with networking, you wouldn’t go with friends," she says. She explains that approaching it like a networking event could change the way the think about dating.

I agree. The more I thought of it as a way to meet people, the more fun I had. I exchanged numbers with a guy at the end of the night and after the party I went out to a bar with a friend I made.

"When people do well [in the club], it's pure attitude," she says. "It's not the hottest people [who do well]. It's the people who go, 'I'm going to treat this as a party where everyone happens to be single, not like a speeding event where I have to interview every single person here."

London and New York are two major cities with tough dating scenes, but certainly very different scenes. Wereko-Brobby anticipates curating the parties will be more of a challenge in NYC. "Londoners don't care if a venue's been around for 10 years or it just opened, but New Yorkers care about new places," she says. The next New York party is on March 1 and will be at Catch.

"You can see its a way more competitive dating scene in NYC," she says. In just one month she received more applications than she got in a year in London. Wereko-Brobby used to live in New York and agreed the dating scene is tricky. "It's hard to people In London but I think it's much easier to meet people there than in NYC."

While she says you'll often see people making out at their parties (I did), her biggest fear with the company is that it'll become a hookup party. "We've avoided that in London but I think it'll be tougher [to avoid that] in New York, especially because there's a lower price point," she says.

But Is It Elitist?

You can't deny that dating is becoming more and more niche, but does that give a chance to streamline the process of meeting someone or limit us? TBH what was appealing to me about Social Concierge wasn't that it was selective or that members have good jobs or went to a competitive school — it was that they're appealing to people are single, annoyed with the dating scene, and fearless, at least enough to go to a bar each month alone to meet new people. The site says:

What happens when you run out of dating options? You’ve gotten with friends, and friends of friends, and now the social pond of options has been exhausted.

As for the criticism around it being an elitist service, Wereko-Brobby joked that she wouldn't even get into her company. And after years as a matchmaker, she's learned a lot about what people are looking for. "I think the one area you're allowed to be elitist or niche is is if your love life," she says. "You like what you like. you can't force someone to change."

My Final Thoughts On The Party

When you're dating in a big city like New York, it can easily feel like you're not enough, and hearing words like "exclusive" and "selective" initially made me even more intimidated. But that wasn't the vibe I got from this party — far from it, actually. There was a great energy there and I found people at the party to be incredibly friendly, interesting, and interested.

They were also vulnerable, which is something we've lost between swiping and secluding ourselves with friends at the bar. I had several conversations with both men and women who talked about frustrating dating was and how they were excited to try something new. When I got home that night, I filled out an application online.

Perhaps it's because everyone was on their own at the party or maybe it was how the event was curated, but unlike bars or dating app parties, I didn't feel like the crowd was glued to their phone all night, antisocial, or unapproachable — and that in and of itself is something worth checking out.