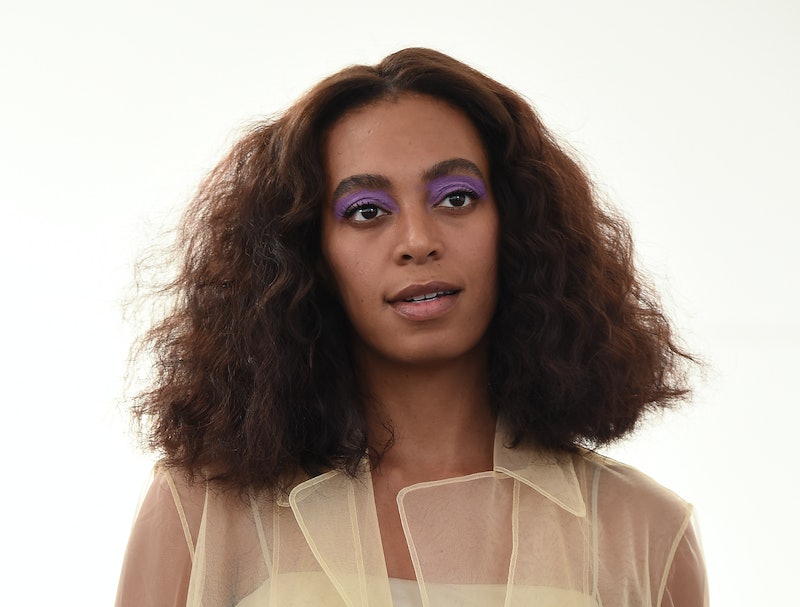 It's been a little over two years since she last blessed fans with an album, but good things come to those who wait, right? Well, if you've been patient, get excited — because Solange is releasing a new album any day now, according a recent profile the 32-year-old star did with the New York Times' T Magazine.

There's a lot of mystery surrounding this yet-to-be dropped, yet-to-be-named fourth album from Beyoncé's little sister, Solange Knowles, but it's already become very highly anticipated. Her last album — 2016's A Seat At The Table — came out to rave reviews, and fans have been eager for more ever since.

Knowles didn't reveal much about the logistics for her new album — no release date, no single to tease. Instead, the singer told the Times that her next album will "likely arrive into the world fully formed at some mysterious and unexpected moment." A pessimist might say that this means the album could still be months away. On the other hand, that "mysterious and unexpected moment" could potentially mean any minute now, perhaps in the next hour. She did clarify it'll drop "this fall," and it is, in fact, currently the fall season — no promises, though.

Regardless, she did at least share a little bit about what fans can expect from the record. Knowles said that "[there] is a lot of jazz at the core" of her unnamed new album — which is, by the way, "still very much in progress — and will be until the very end," the piece noted. Knowles continued, saying that the album would incorporate jazz "but with electronic and hip-hop drum and bass because I want it to bang and make your trunk rattle." Sounds good so far.

It will also be "warm ... fluid and more sensual than her last [album]," the publication revealed, but it will differ from A Seat At The Table topically as well. After the singer encountered "spatial difficulties" during an outdoor performance of "Scales" in 2017, her mindset about the core matter of her music shifted. "I realize how much wider, figuratively and literally, my work could be if I took myself away as subject," Knowles told the Times. A Seat At The Table was a very personal album, but it sounds like the singer might be looking outward for inspiration this time around.

That's about the extent of what Solange divulged about what will eventually — sooner rather than later, if we're lucky — be known as her fourth album, but even those very few, very vague details have sent fans on Twitter into a frenzy. "I don't know what Solange is about to drop but I'm ready to receive even if its just more Instagram visuals," one fan joked. "[I’ve] been waiting for new solange content for so long. this news seriously just made my entire day/week/month/year," another fan tweeted.

Seriously, though — Solange's fans are hyping the hell out of this album before they've ever even heard a single note. The excitement is real. "SOLANGE NEW ALBUM SKSSGSJKF THANK YOU GOD," one fan exclaimed. Another fan simply stated, "I'm here for a new Solange album." Honestly? Same.

It truly seems as if Knowles could drop 60 minutes of nothing but white noise, and her fans would still bow down. That's loyalty. That's confidence. That's the level Solange's fans are at in anticipation of her new album, and it's highly unlikely that she'll disappoint.