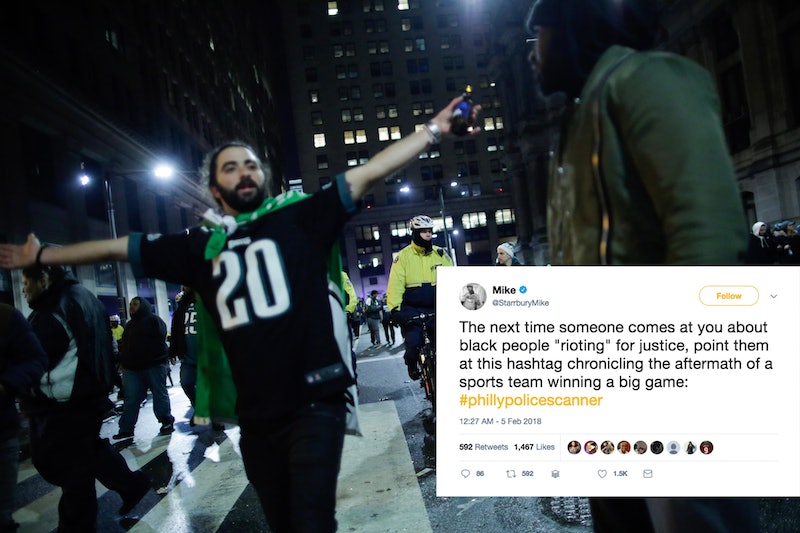 Celebrations — and riots — erupted throughout Philadelphia on Sunday night, after the Eagles won their first-ever Super Bowl victory. Using the hashtag #PhillyPoliceScanner, a lot of people made jokes about those Eagles fans who threw caution to the wind, scaling telephones poles and climbing onto the roofs of convenient stores. Some people used that very same hashtag to criticize what they called a double standard when it comes to the way cops treated the rioting Eagles fans as opposed to people of color who choose to protest.

Rowdy football fans damaged property, looted, and even punched police horses in the face in the aftermath of the Eagles' NFC Championship and Super Bowl wins. Yet amid the thousands of people rioting in the streets in Philadelphia on Sunday night, flipping over cars and breaking into City Hall, police made just three arrests.

Compare that to Black Lives Matter marches, which are meant to draw attention to the fact that police violence in America disproportionately affects black and brown people, and may see protesters tear gassed or arrested by the hundreds. Authorities didn't go to these lengths with the Philly fans, prompting some Twitter users to call out a double standard.

Some also drew attention to comments made about people of color "looting" grocery stores following Hurricane Harvey. For some reason, looting for survival is a criminal offense, but looting after a Super Bowl win is just "kids being kids."

"We laugh about white people doing things like this for a team but look down on black and brown people upset over a killing," one user tweeted.

What's Wrong With Taking A Knee?

Someone pointed out the irony that some people rioting in Philly have a problem with the take-a-knee protests in the NFL, which are peaceful demonstrations protesting against police brutality.

If NFL players who take a knee are disrespecting America and the troops, what are the fans in Philly doing?

For some, it was difficult to understand why fans were destroying the city they love because they won a football game.

A lot of people took photos and videos so they could remind critics of BLM that it isn't just people of color who loot and riot.

Destroying Their Own City

A lot of people thought the reaction of the police was not on par with the amount of damage that the fans were actually doing to the city.

It's unfair to attack black people for "rioting" for justice, someone tweeted, when this is how white fans react to a football game.

Someone referenced Tamir Rice, the 12-year-old boy who was shot and killed by police for holding a toy gun.

A lot of people kept reminding their followers that there have been riots over much more important things, like the murders of Freddie Gray and Michael Brown, two unarmed black men killed by police officers.

Some conservatives who've been critical of BLM were sharing videos of themselves climbing telephone poles and rioting in the streets of Philly.

Critics of BLM often accuse the movement of being anti-police — but as one Twitter user noted:

The same 20-somethings that have the Blue Lives Matter symbol as their Facebook photo are the same kids throwing bottles and rockets at cops tonight.

If the masses in Philly were people of color, especially given the city's history, people thought it would have been a much bigger deal.