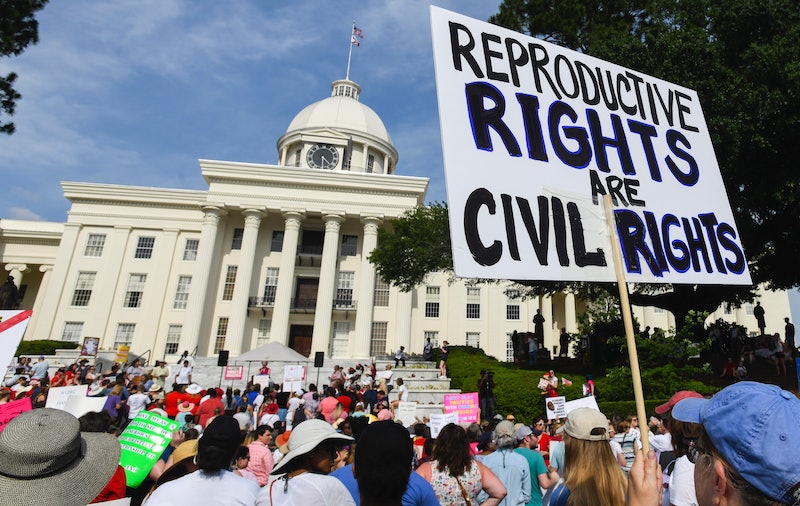 Anti-abortion advocates are reportedly hoping to overturn Roe v. Wade when a case challenging the ban reaches the Supreme Court. But meanwhile, those who would have to actually try cases against people who receive abortions and the doctors who provide them may take a stand, too. The Washington Post reports that some prosecutors have called recent abortion laws unconstitutional and said they won't wouldn't bring charges in the first place.

The outlet listed examples of other cases in which prosecutors would decline to prosecute, for example, illegal search and seizures that lead to drug arrests. Prosecutors in Utah, Georgia, and Michigan have gone on the record declining to prosecute people who obtain abortions and doctors who provide them, The Post reported — despite laws that have recently been passed or other bans that would become enforceable if Roe were overturned.

"We do this all the time, deciding that we have an ethical duty not to prosecute a case because it would be in violation of a constitutional protection afforded to citizens," Salt Lake County’s District Attorney Sim Gill told The Washington Post. "What’s new here is that this is an area, abortion, that we typically don’t find ourselves in, because the procedure has not been criminalized like this in recent history."

Michigan's Attorney General Dana Nessel was among the first to speak out after the Alabama ban was passed. "I will never prosecute a woman or her doctor for making the difficult decision to terminate a pregnancy," Nessel said outside a Planned Parenthood, according to The Detroit Free Press. "I think I can go four or maybe eight years without sending women to be butchered in back alleys." According to the Guttmacher Institute, Michigan is one of the states that has a pre-Roe ban that is not currently enforced.

In Georgia, according to The Atlanta Journal-Constitution, people could be charged with murder for receiving an abortion. Prosecutors in the four largest counties there have declined to prosecute people who receive them, the paper reported.

"As District Attorney with charging discretion, I will not prosecute individuals pursuant to HB 481 given its ambiguity and constitutional concerns," DeKalb County District Attorney Sherry Boston said in a statement provided to paper. "As a woman and mother, I am concerned about the passage and attempted passage of laws such as this one in Georgia, Alabama, and other states."

In Utah, Salt Lake District Attorney Gill went so far as to get a court order to confirm that he doesn't have to enforce the law, the Associated Press reported. If Roe were overturned, though, Gill said that he would likely have to enforce it.

"My job is to keep my personal beliefs out of it, but I absolutely believe that our citizens have constitutional rights and our institutions have an obligation to serve those citizens and not simply roll over and play dead," Gill told the AP.

Not all prosecutors who have spoken out share the exact same opinion. At least one prosecutor in Georgia left open the possibility of charging doctors and nurses, according to The Journal-Constitution. Cobb County Acting District Attorney John Melvin told the paper he would consider those cases on a case-by-case basis.