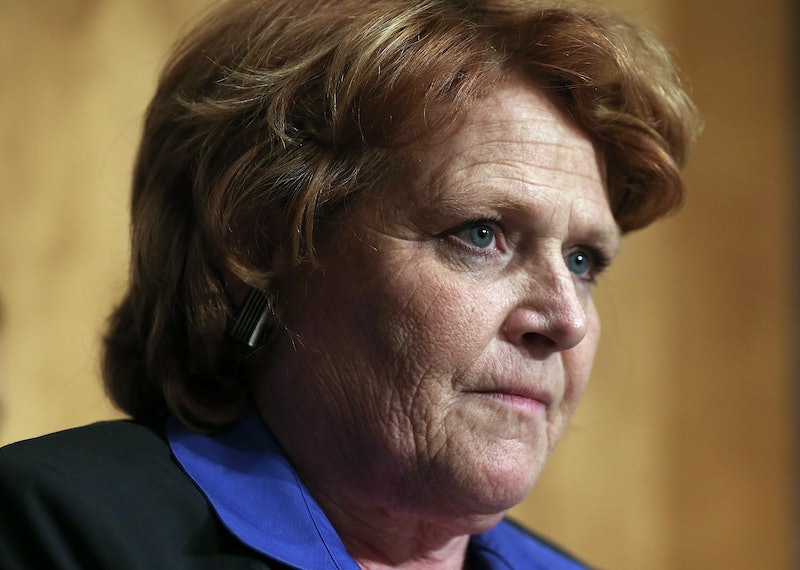 Following a campaign ad that accidentally revealed the identities of over 100 sexual assault survivors, Sen. Heidi Heitkamp could face legal action for reportedly violating the women's right to privacy. In addition to outing some survivors without their consent, one woman wrote on Facebook that some of those listed were actually mistakenly identified as victims of sexual assault. Bustle has reached out to Heitkamp's office for comment.

"Heidi Heitkamp’s political agenda has interfered with, or downright ruined, our lives," the woman, whose signature appeared in the ad, wrote. "Survivors of assault who had taken care to avoid the subject were suddenly bombarded by questions asking them to explain to their loved ones why their name appeared on this list. Women who have never been assaulted spent the day reassuring loved ones of their safety. All of us have been unsettled by the knowledge that our full names and locations have been publicly announced."

The campaign ad, which Heitkamp apologized for on Tuesday, was meant as a condemnation of her opponent, Rep. Kevin Cramer, who last week implied the #MeToo movement was unnecessary. After the ad was printed in North Dakota newspapers on Monday, several women came forward to say they had not given their permission to be included among the signatories.

"I'm furious," one North Dakota woman named in the letter told the Associated Press. "I have only shared my story with a couple of people in confidence. ... I didn't want it blasted for the world to see." She added that she had been planning to vote for Heitkamp next month, but will "definitely not now."

"I don't think anyone is perfect in the world and sometimes when you are on a big stage you can make big mistakes," Heitkamp responded in an interview. "And I think our campaign made a big mistake and we need to own it and we need to fix it." Late Tuesday, her campaign announced it had fired a staffer supposedly responsible for gathering names for the ad. Heitkamp also issued a press release assuring those affected that she and her team were in the process of issuing a retraction on the letter, as well as "personally apologizing to each of the people impacted by this and taking the necessary steps to ensure this never happens again."

Despite Heitkamp's efforts to make amends, some of the named women are considering legal action to rectify the situation. The woman who posted on Facebook referenced Marsy's Law, a section of the North Dakota state constitution, which protects victims of crimes from the disclosure of identifying information, in her argument.

"Our privacy was violated on this day, and we deserve closure," she wrote. "In order to receive the closure we need, we are searching for a lawyer who will take our case. We need our own voice. Together, the women listed on Heitkamp’s advertisement are searching for competent legal refuge."

Heitkamp, the Democratic incumbent in a Senate race that is looking increasingly difficult to win, seemed not to care about the legal implications of her apology. "Some people who are lawyers would say the worst thing you can do if you’re worried about lawsuits is admit culpability or negligence and I’m admitting it right here," she said in her interview. "This is a very flagrant error of the campaign and I own it."