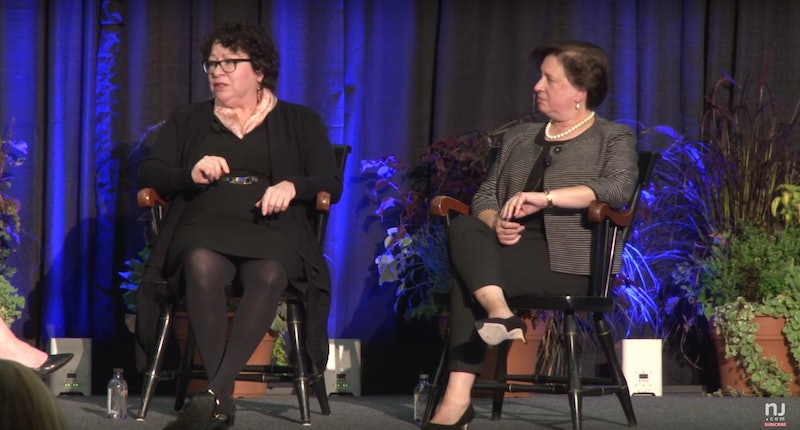 On Friday, shortly after Supreme Court nominee Brett Kavanaugh locked in the votes to win confirmation in the Senate, current justices Sonia Sotomayor and Elena Kagan took the stage at Princeton and talked to a packed audience about the court. Sotomayor and Kagan's comments about the court's impartiality seemed particularly salient, given the enormous controversy surrounding Kavanaugh's nomination.

“This is a really divided time," Kagan said at the She Roars event. "Part of the court’s strength and part of the court’s legitimacy depends on people not seeing the court the same way they see the rest of the governing structures in the country. It’s an incredibly important thing for the court to guard.” She added that the court can't become "an extension of the terribly polarized political process and environment that we live in."

Kavanaugh's nomination has indeed been highly polarizing. Several women accused him of sexual misconduct during the confirmation process; Kavanaugh denied all of the the allegations, but many Republicans and conservatives, including Kavanaugh himself, claimed that the accusations were part of a Democratic smear campaign against the Trump-appointed judge. Democrats, meanwhile, accused Republicans of rushing the process, which included a last-minute FBI investigation into the allegations against Kavanaugh that many on the left said was insufficient and too limited to be of value.

Kagan and Sotomayor didn't directly address Kavanaugh's nomination during the Princeton event on Friday, and according to Yahoo News reporter Lisa Belkin, his name wasn't mentioned once. However, they did speak in broad strokes about the court's non-partisan reputation, and how best to maintain it.

Sotomayor noted that protecting the Supreme Court's legitimacy requires, in part, that the justices "rise above partisanship in our personal relationships" and "treat each other with respect and dignity" even if they disagree sharply on judicial philosophy. She noted that she and Neil Gorsuch, President Trump's first appointee to the court, are "doing a lot of work together promoting civic education in the United States."

“We do manage to agree on lots of things," Sotomayor said of herself and the court's more conservative justices. "We have a chance of holding on to our legitimacy.”

"There are some periods in our history where the members of the court had pathological relationships with others, they would walk out of the room when others walked in. We don't do that," Kagan said. "We have lunch all the time. This might seem a little thing, but every time we meet to discuss cases, we follow that with a lunch in the Judges dining room, and there are rules. You can't talk about cases."

The Senate is expected to vote on Kavanaugh's nomination on Saturday. Although the fate of his appointment was in limbo for weeks, it became all but assured on Friday after Sens. Susan Collins and Jeff Flake, two Republican holdouts who'd remained undecided on his nomination throughout the process, said that they'll vote for him.

Sotomayor and Kagan also discussed lighter issues during their Princeton appearance. When asked by a moderator what they'd be doing if they weren't on the highest court in the land, Sotomayor remarked that she'd like to be a salsa dancer, while Kagan said that she'd "be Serena Williams."