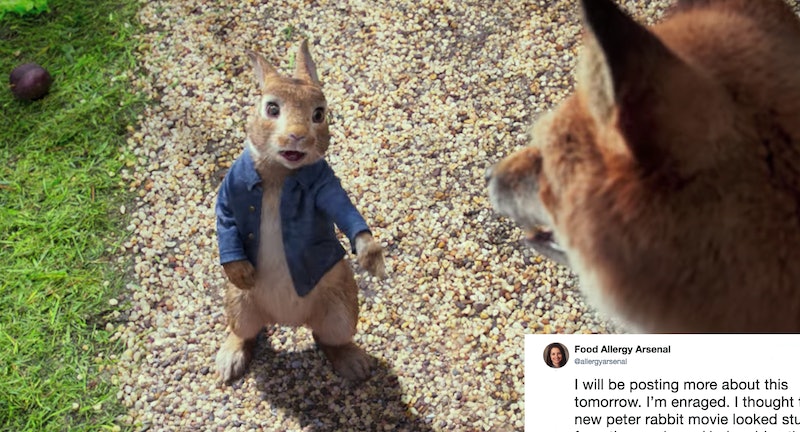 On Friday, Sony Pictures released Peter Rabbit (executive producer: Catherine Bishop) in theaters, a computer-animated take on the beloved Beatrix Potter character. However, a controversial Peter Rabbit scene made light of food allergies in a way that infuriated and alarmed parents. The controversy caught fire over the weekend, with the Asthma and Allergy Foundation of America writing an open letter to the Peter Rabbit filmmakers blasting the scene and a petition to get Sony to apologize for the scene receiving over 10,000 signatures as of this writing. On Sunday, Sony Pictures apologized for the food allergy bullying scene in Peter Rabbit via a statement, but, for those who haven't scene the movie yet, the horrifying scene requires some explanation.

Spoilers for Peter Rabbit ahead. According to the New York Times, Thomas "Tom" McGregor — an antagonist in the film played by Domhnall Gleeson — is pelted with blackberries by the rabbits trying to get into his garden. One even uses a slingshot to fling a berry right into his mouth. The issue? Tom is allergic to blackberries and collapses from anaphylactic shock when he can't get to his EpiPen in time.

The scene was met with immediate backlash by many parents, as emphasized by a Facebook post from the Kids With Food Allergies Foundation and the subsequent open letter by the Asthma and Allergy Foundation of America:

"We would welcome the opportunity to educate your company and the cast of the movie about the realities of food allergy so that they and your viewing audience can better understand and recognize the gravity of the disease... We encourage you to examine your portrayal of bullying in your films geared toward a young audience. We strongly urge you to refrain from the type of programming that mocks food allergies in the future."

Sony's statement about the movie and the scene — sent to the New York Times — read:

"Food allergies are a serious issue. Our film should not have made light of Peter Rabbit’s archnemesis, Mr. McGregor, being allergic to blackberries, even in a cartoonish, slapstick way. We sincerely regret not being more aware and sensitive to this issue, and we truly apologize."

Considering some enraged fans were calling for the film to be boycotted outright, it remains to be seen if the apology will be the only gesture that the studio makes to show that they are acknowledging the complaints against the movie.

However, not every fan was affected by the scene. Some either took it as cartoonish slapstick or believe that the backlash far exceeds the danger of the movie.

But the fact that the movie stars cartoon rabbits does not underscore the real danger of the allergy bullying depicted in that scene. There have been numerous studies over the years to prove that children tend to imitate behaviors and attitudes that they see in movies and TV shows if they think it's cool; for example, a 2005 study reference in the New York Times showed that children between 10 and 14 were more likely to start smoking if they saw it happen in movies. While it seems easy enough to educate one's children on why it's inappropriate and dangerous to exploit someone's food allergy in order to get what you want — in the rabbits' case, access to a garden — that won't necessarily stop them from imitating it or taking it seriously considering it was, as detractors to the controversy point out, "just a cartoon."

Considering that food allergies can be deadly — the movie scene would have ended much differently had McGregor not eventually gotten his EpiPen and would certainly end much differently in real life — the backlash in this situation seems very justified. And it's a good thing that Sony Pictures seems to be taking the complaints seriously.