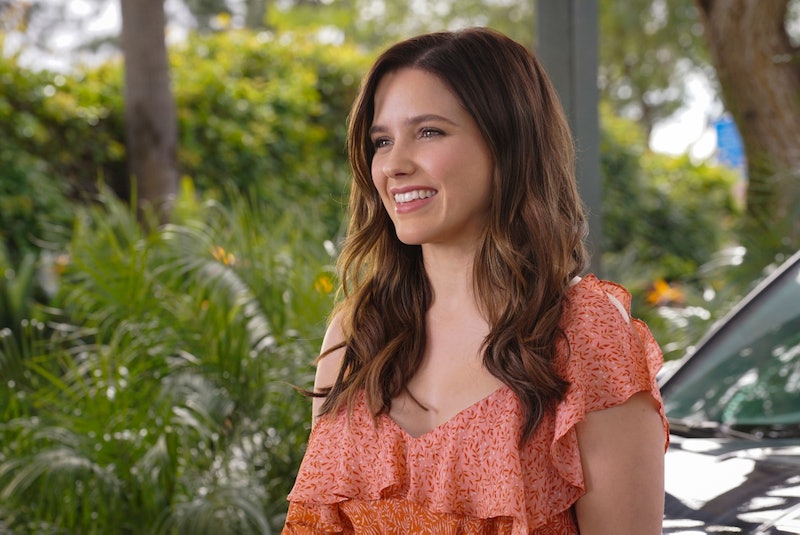 Spoilers ahead for Jane the Virgin Season 5, Episode 12. While Jane learned in last week's episode that Rafael was seeing somebody, she didn't know A) that he was dating just one woman, or B) that she would be so gorgeous. In Chapter 93, audiences learn that Sophia Bush plays Julie on Jane the Virgin — Raf's latest love interest and someone who uses way too many emoji for his comfort.

But that's not all: Julie also subtweets Jane in her Instagram story, posting a GIF of a koala hanging onto someone's leg with the caption, "When your boyfriend's baby mama is a stage 5 clinger." Which, rude. Whatever the case, who checks to see each individual person who watched their Instagram story?

Plus, there are even more red flags when it comes to Julie: She calls Rafael "Rafa," which the narrator finds supremely weird, and confronts Jane about her behavior. While it's true that Jane is protective of Rafael, she wasn't trying to stalk Julie (OK, so looking at her Instagram on her mom's phone probably wasn't the best move). As a result, the author decides that she and Petra need to hit the town as (reluctantly) single ladies.

"The point is, Raf is going to meet someone," she tells her friend over the phone. "And even if Julie is just a dry run, he's going to fall in love again. And I want him to be happy, I really do, but I think I'll be more prepared for that if I'm happy first." In other words, she's trying to protect her heart from breaking again and sees Julie as someone who can truly make Rafael happy.

As a result, Jane assumes that her ex-boyfriend is crazy about Julie. But after she puts her foot in it and tells Rafael's girlfriend how much he likes dating her, his response surprises Jane. "I was just hoping that it would fizzle out on its own, and I could let her down easy, but now she thinks I'm like, super into her!" he laments. But our protagonist, ironically inspired by Petra's advice to be the bigger person, convinces Rafael to give his girlfriend another chance.

Except he doesn't want to give her another chance, which he realizes after spotting the list Jane convinced him to write, detailing the qualities he's looking for in a woman. "I realized that there was one deal-breaker with Julie that I couldn't get past," he tells Jane, through tears. "It's love. She's not you, Jane! I love you. I've tried to stop, but I can't! And I don't want to."

This is obviously what Jane has been waiting to hear, and the two share one of their many "back together" smooches (because just in case you forgot, Jane and Rafael have had a pretty rocky history over the past five seasons). However, this happy ending (complete with an ensemble musical number) is a bit too early in the season to stick. There are still seven episodes left in Jane the Virgin, so it seems doubtful that Julie would be the last obstacle between the couple getting together for good. After all, just because Michael is back in Montana doesn't mean he couldn't come back.

But whatever happens between them in the ensuing weeks, it's looking good for Jafael right now. And hopefully Julie is understanding about Rafael breaking up with her and won't pull a River Fields on the two lovebirds.