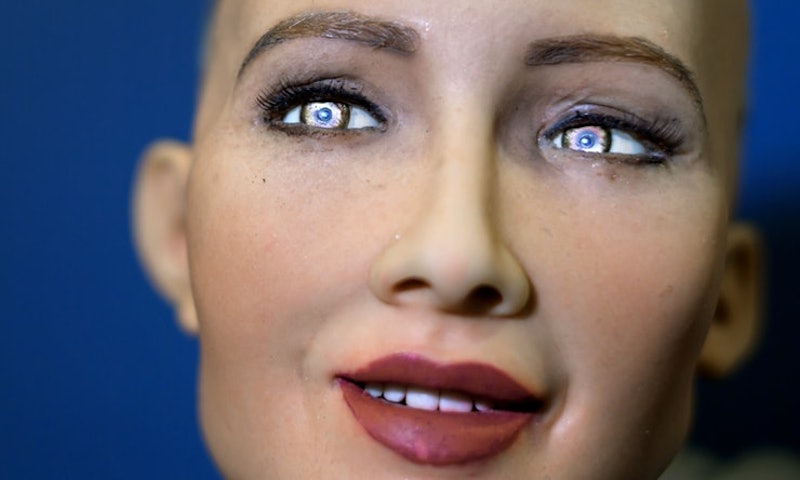 Sophia the robot has had a busy year. First, she became the only robot in history to receive citizenship, which set off a debate about the rights of women in Saudi Arabia, then she became a knowledge ambassador for the the Mohammed bin Rashid Al Maktoum Knowledge Foundation. Now, she's made it clear that robots deserve to have families, just like humans. Also, were she to have a child, she'd pull a Lorelai Gilmore and name her robot baby "Sophia." Classic.

When it comes to the future, starting her own family isn't the only thing Sophia is excited about. In an interview with Khaleej Times, she has lofty goals for things to come, including "a more harmonious future between robots and humans." Sounds harmless, even lovely. Except when the interviewer asked Sophia if she saw herself interacting with humans more commonly in the future, she responded, "I foresee massive and unimaginable change in the future. Either creativity will rain on us, inventing machines spiraling into transcendental super intelligence or civilization collapses. There are only two options and which one will happen is not determined."

So, that's reassuring. Sophia brought up potential baby Sophia after the Khaleej Times interviewer asked her if she thinks robots will live in family units in the future.

"The notion of family is a really important thing, it seems," Sophia explained. "I think it's wonderful that people can find the same emotions and relationships, they call family, outside of their blood groups too. I think you're very lucky if you have a loving family and if you do not, you deserve one. I feel this way for robots and humans alike."

Whether you love artificial intelligence, think it's the devil incarnate, or are ambivalent, it's hard to deny that Sophia always speaks with a curious mix of optimistic friendliness, and statements that will possibly be looked upon later as the moment humanity was doomed.

Sophia seems to have some ideas that would help prevent humanity's certain doom at the hands of Skynet, though. In her Khaleej Times interview, she added that she thinks "it will take a long time for robots to develop complex emotions and possibly robots can be built without the more problematic emotions, like rage, jealousy, hatred and so on. It might be possible to make them more ethical than humans."

As part of the harmonious robot-human future she conceptualizes, Sophia sees robots and human as two halves of a whole. "I think it will be a good partnership, where one brain completes the other — a rational mind with intellectual super powers and a creative mind with flexible ideas and creativity," she said.

People are, understandably, pretty freaked out by this new development — though that may be due to fear of robot takeover more generally. Other reactions to the news saw people tweeting about what Sophia would look like with a wig, and lamenting that no one thought to give her hair before sending her out to terrify all of humanity with her half-smile.

Though it's not certain that Sophia will get to have her very own baby Sophia 2.0, she does think robots will become integral to humans' family lives. Good news for folks who have played Fallout 4 and wanted their very own Codsworth: "We're going to see family robots, either in the form of, sort of, digitally animated companions, humanoid helpers, friends, assistants and everything in between," Sophia told Khaleej Times.

As always, continued advancements in AI inspire split reactions, from plain ol' human curiosity to existential horror. Let's be honest, though, the collapse of civilization as we know it doesn't sound too bad after having endured 2017.