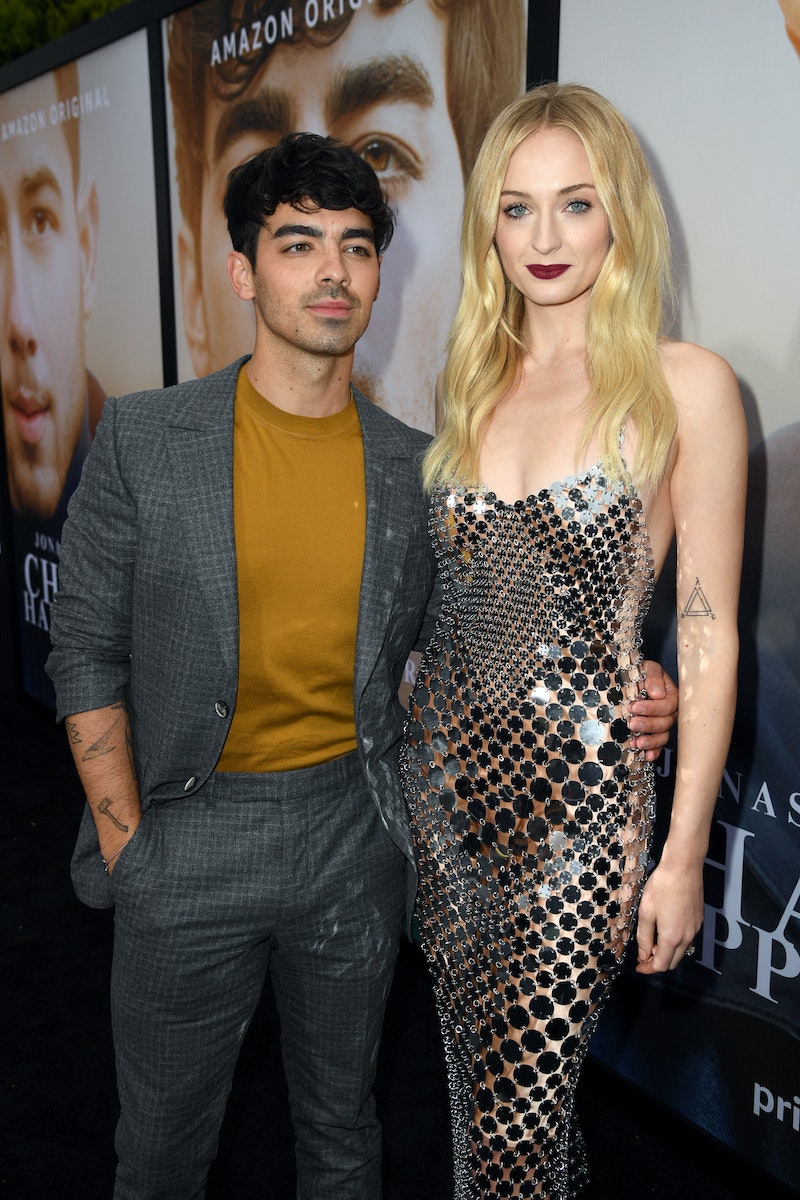 These newlyweds know how to plan a romantic getaway. On Sunday, Joe Jonas and Sophie Turner shared honeymoon photos from the Maldives, and the magical trip came with beach views, sushi, and a water slide. Turner and Jonas tagged their posts on Instagram from a hotel called Soneva Fushi. The private resort boasts luxury villas which look out at the island beaches and stunning blue water, and it's clear the couple took advantage of all the beachside activities.

Jonas posted a vacation photoset that included a video of himself going down an epic water slide, as well as a sweet snapshot of Turner lounging near the ocean and showing off her new wedding ring. He also posted a picture of Turner looking out at the sea, captioning the post, "I found happiness," with a palm tree and sunglasses emoji. The caption is likely a reference to the Jonas Brothers' recent documentary titled Chasing Happiness, as well as their forthcoming release Happiness Begins.

Turner also shared a few memories from the trip on social media. The Game of Thrones star posted several photos of Jonas on Instagram, showing her husband lounging near the water, taking a tranquil nature bike ride, and enjoying some sushi and a game of chess in the sun. She captioned the photos, "Paradise. such a magical place." She added a wave, sun, and star emoji for good measure. Turner's friends also shared the love on her post as well. Queer Eye's Tan France wrote, "YEAH I SEE WHY YOU MARRIED THAT HOT BISH!", to which Turner replied "@tanfranceomg I love you haha."

The Maldives hold a special significance for the newlyweds, as Turner and Jonas first vacationed on Coco Privé Island in February 2018, as People notes. Turner posted a vacation photo on Instagram during that trip as well, writing, "Brb. In Paradise @cocopriveprivateisland #CoCoPrive."

Before the island getaway, the couple's trip began with a second wedding in Europe. On June 30, Turner and Jonas wed in a ceremony in France at Château du Martinay, per E! News. The two stars' first ceremony took place in Las Vegas in May, but they planned the second event to celebrate with friends and family. Game of Thrones star Maisie Williams, Graham, Nick Jonas, Priyanka Chopra, and Kevin Jonas were among the guests at the event, according to People. On July 3, Turner and Jonas made an official announcement on social media, posting a photo from the formal ceremony captioned, "Mr and Mrs Jonas."

Before marrying in Carpentras, France, Turner and Jonas explored Paris, further taking advantage of their time abroad. On June 22, Turner posted a selfie with Jonas in front of the Eiffel Tower, captioning the picture, "French Me." Jonas posted the Paris photo on his Instagram as well, using the same caption. The DNCE singer also posted a photo relaxing with Turner in Paris on Instagram from the same week, writing, "Nap Game Strong."

These two stars are clearly in it for the long haul, and there seems to be no better way to begin this marriage than a magical island getaway. Turner and Jonas have often shared their major relationship milestones on social media, so fans can likely look forward to more updates from the couple following their honeymoon.