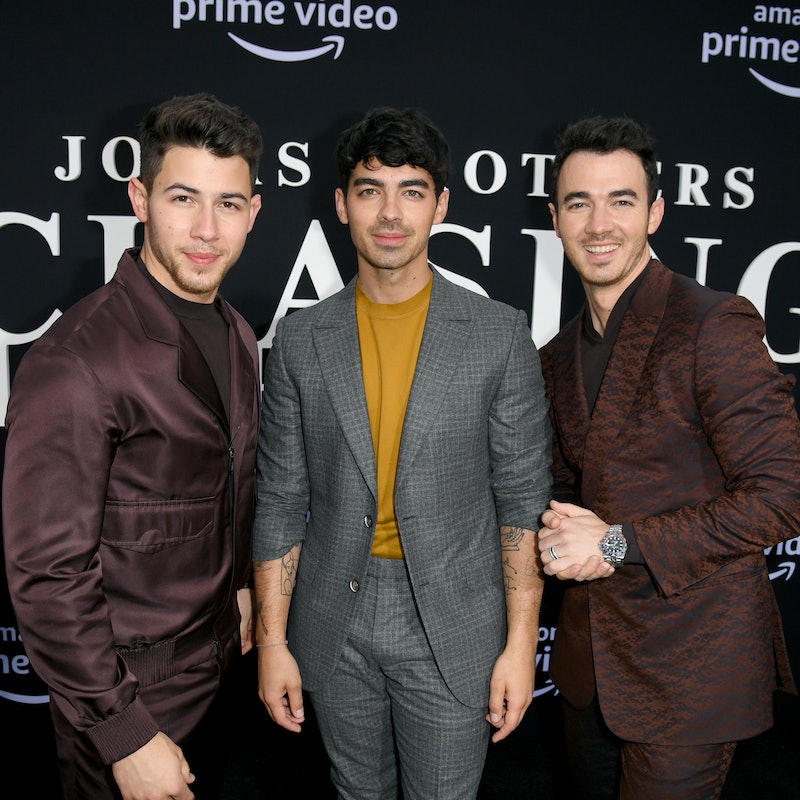 The Jonas Brothers are all grown-up and madly in love. The band's first studio album in a decade, Happiness Begins, is packed with danceable tunes, references to their history, and love songs dedicated to their wives. In fact, the most romantic lyrics the Jonas Brothers wrote on Happiness Begins will make you even more jealous of the fact that you're not a "JSister" than ever before.

"It's very important on an album for us to have some romantic songs," Kevin told Apple Music when Happiness Begins was released on June 7, and it seems as if the trio have more than lived up to that promise. In addition to the song "Comeback" — which plays double duty as a plea to an ex and an homage to the brother's reunion — and the "Lovebug"-esque acoustic ballad "Love Her," both Nick and Joe also wrote "love letters" to their significant others that have fans swooning. In April, Nick told Billboard that "I Believe" was inspired by his whirlwind romance with wife Priyanka Chopra, while "Hesitate" was Joe's ode to his relationship with Sophie Turner.

While many years have passed since the band's heyday as Disney Channel superstars, listening to some of the more romantic songs on Happiness Begins is guaranteed to bring back your overwhelming crush on the Jonas Brothers once more. Don't say we didn't warn you.

"Call me crazy and people saying that we move too fast / But I've been waiting, and for a reason / Ain’t no turning back / 'Cause you show me something I can't live without" — "I Believe"

Nick's "love letter" to Chopra takes on anyone who criticized the pair's decision to tie the knot less than a year after their first date, and proves that their romance is definitely one for the ages.

"Love Bug" is an important song for the Jonas Brothers — in fact, playing that song together inspired the boys to reunite — so it seems only fitting that their comeback album has a song take takes that romantic, incredibly catchy sentiment to the next level.

Joe confirmed that "Hesitate" is his ode to new wife Turner, telling Apple Music that the song is "one of those love letters you write to your partner saying, 'I'll be there no matter what.'" Just when you thought these two couldn't be more romantic.

In addition to being a catchy, smash hit comeback single, "Sucker" is also a song all about how devoted the Jonas Brothers are to their wives. And after watching the "JSisters" steal the show in the music video, fans totally get it.

"Every night, every day; how about every lifetime? / Yeah, I know what they say, and that's fine / 'Cause I'm here to stay through the good and the bad times" — "I Believe"

Promising to love your wife through "every lifetime" is perfectly on brand for Nick, considering he practically proposed to Chopra on their first date.

"Time stands still and it's only us / What we feel started way before we ever touched / Just imagine only us / Yeah, you found me right before I'd given up" — "Strangers"

In addition to being the most reminiscent of their power-pop peak, "Strangers" also has the kind of "love at first sight, somehow it feels like I've known you forever" story that we always imagined as part of our own daydreams about falling in love with the Jonas Brothers.

Yes, "Comeback" is technically about Nick, Kevin, and Joe coming back together to make music again, but it can also be seen as a deeply romantic song about people coming back together after struggling while apart. Either way, it's guaranteed to make Jonas Brothers fans a little misty-eyed when they listen to it.

The Jonas Brothers have certainly grown and changed a great deal in the years since releasing their last studio album, but at least longtime JoBro fans can count on the fact that these three will always be able to write a deeply romantic love song.

More like this
The Spice Girls Just Dropped A Brand New Music Video
By Sam Ramsden
20 Years Later, Kelly Clarkson & 'American Idol' Judges Reunite For Her Hollywood Walk Of Fame Star
By Radhika Menon
Kanye West Apologizes To Kim K "For Any Stress I Have Caused" In Rare Interview
By Jake Viswanath
Adam Levine Denies Having An Affair — But Admits He “Crossed The Line”
By Jake Viswanath and Radhika Menon
Get Even More From Bustle — Sign Up For The Newsletter