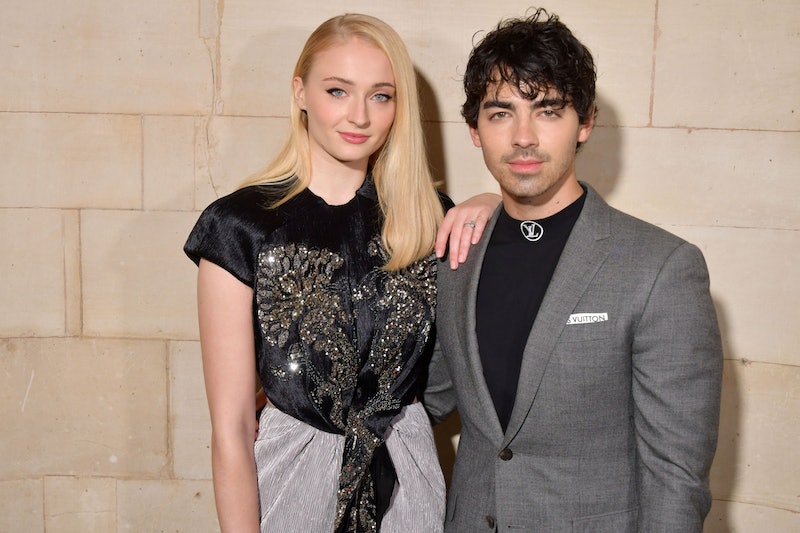 Despite the speculation and theories regarding the final season of Game of Thrones, the stars of the series have been keeping the spoilers firmly under wraps amongst themselves and their loved ones. This is certainly the case Sophie Turner, as she recently revealed that Joe Jonas knows the ending of Game of Thrones. Now before you get excited or jump to conclusions, she also explained that he's signed a non-disclosure agreement (NDA) meaning that his lips are sealed regarding the fate of your GoT faves. Phew.

Speaking to Entertainment Tonight, Turner explained how Jonas was frequently on set during the filming of season eight and how he eventually began to put the pieces together. "Joe was on set most of the time so he kind of figured it out and he was like, 'Can you fill me [in]?'" the actor said. "And, he signed an NDN, NDA and everything so it's all good."

In May 2018 Jonas spoke to Australian morning show Today about how Turner wouldn't tell him anything regarding the plot, as she knew he was a huge fan of the show. "Eventually I might get something but I think she wants to save it for me because obviously she knows that one little tid bit can really ruin it for me." Filming for the eighth season finished last July, but it seems as though Turner revealed the ending to Jonas at the beginning of March judging by an interview with Glamour UK. "I've just told Joe [Jonas] but he's so mad at me — he loves the show!" she told the magazine. "Well, I have to tell someone, otherwise I'd burst."

As the Daily Mail reports, Turner originally disclosed that she revealed the ending to a few people during an interview with W Magazine in January, after telling the publication that she isn't that great at keeping secrets.

But after seeing headlines on Twitter that some fans were angry that she'd told people the ending, she clarified exactly how many friends she told in an interview with Entertainment Weekly in March. "The truth is I've only told two people. It's not that many. To be honest, I don't read many of the mentions on Twitter because there's normally quite a bit of hate," she said. "Everything I say will always have some negative reactions so I'm not surprised."

I don't know about you, but I would have done the same thing if I was Turner. I mean, she and the rest of the cast obviously know the ending but I'd want to scream it from the rooftops if I had no one else to share it with. Luckily it seems that the GoT cast were able to share it with those close to them at least.