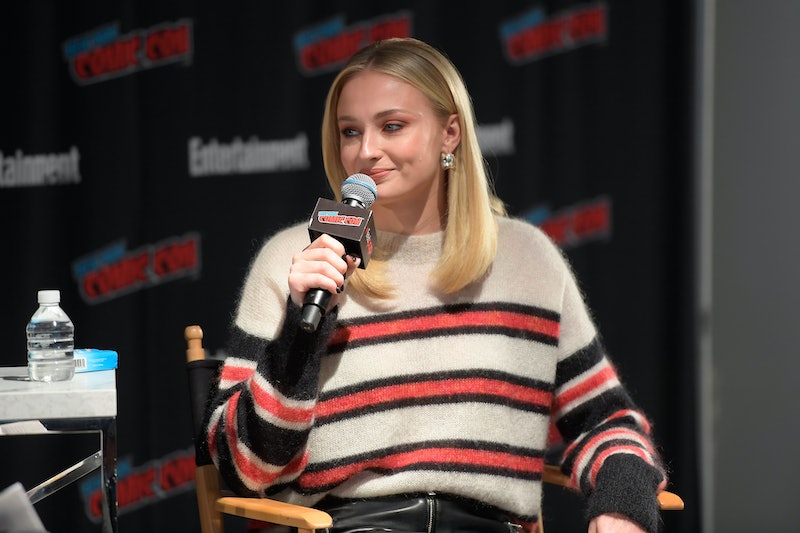 In a new cover story for Rolling Stone, actor Sophie Turner opened up about her sexuality. At one point in the profile, the Game of Thrones star spoke about experimenting with her sexuality prior to her engagement to fiancé Joe Jonas. Naturally, the Internet exploded, with some fans excitedly asserting on social media that Turner had “come out,” as BuzzFeed reported. But Turner never actually gave a label for her sexuality in the interview, and experts say that that's entirely her decision. Even though fans on social media may have intended to be supportive with their comments, the story highlights the potential risks of assigning labels to people that they haven’t publicly talked about those labels themselves.

In the Rolling Stone piece, Turner briefly discussed getting engaged at a relatively young age, saying: “I think once you’ve found the right person, you just know. I feel like I’m much older a soul than I am in age. I feel like I’ve lived enough life to know. I’ve met enough guys to know — I’ve met enough girls to know. I don’t feel 22. I feel like 27, 28.” When the interviewer inquired about the mention of “girls,” Turner responded, “Everyone experiments. It’s part of growing up. I love a soul, not a gender.”

These comments led to ample social media posts declaring Turner had “come out” and celebrating that choice. But Kevin Wong, a spokesperson for The Trevor Project, a nonprofit that supports LGBTQ teens in crisis, tells Bustle that "Coming out is a process [that's] going to be unique for everyone." Rather than discussing whether or not someone has come out, Wong says, it can be more productive "to talk about supporting folks who have come out."

Factors like comfort level, safety, and fear of rejection from family can all play a role in a person’s decision to speak about their identity, Wong says. A better way to support someone who’s discussing their gender identity or sexual orientation without assigning labels, Wong says, might be “celebrating those people for making the choices that feel healthy for them, whether that is coming out, whether that's choosing not to, or telling certain people.”

And whether it's towards a celebrity or towards someone in your own life, the practice can have unintentional consequences. According to the National Alliance on Mental Health, LGBTQ individuals are nearly three times more likely to experience a mental health condition like depression or anxiety disorder due to factors like fear of coming out and being discriminated against for their sexual orientation and gender identities. At best, ascribing a label to someone who hasn’t publicly claimed one is presumptive — at worst, the practice can be harmful to that person.

Wong recommends treating the person in an affirming way to demonstrate your support, adding that having at least one supportive person can reduce an LGBTQ person's risk of suicide by 30 percent. “If they decide to come out more publicly, you can help them by talking through what they think other reactions will be and that can be all the good stuff and the less good stuff [...] helping talk through those reactions really helps prepare people think through what to expect,” says Wong. “And that might also bring them to a place where they decide, ‘You know what, I'm not ready right now to come out to more people’ and that's fine.”

Whether it’s a celebrity or a friend, it’s important to remember that every person has the right to self-determine their identity, and that that may or may not include a label.

More like this
The 19 Best Tweets & Memes About Bisexual Awareness Week
By Lexi Inks
This Psychological Effect Might Be Keeping You From Hitting Your Goals
By Lexi Inks
Pro Footballer Zander Murray Is "Blown Away" By Support After Coming Out
By Sam Ramsden
An Honest Review of MeUndies Boxers, According To A Non-Binary Person
By Megan Lasher
Get Even More From Bustle — Sign Up For The Newsletter