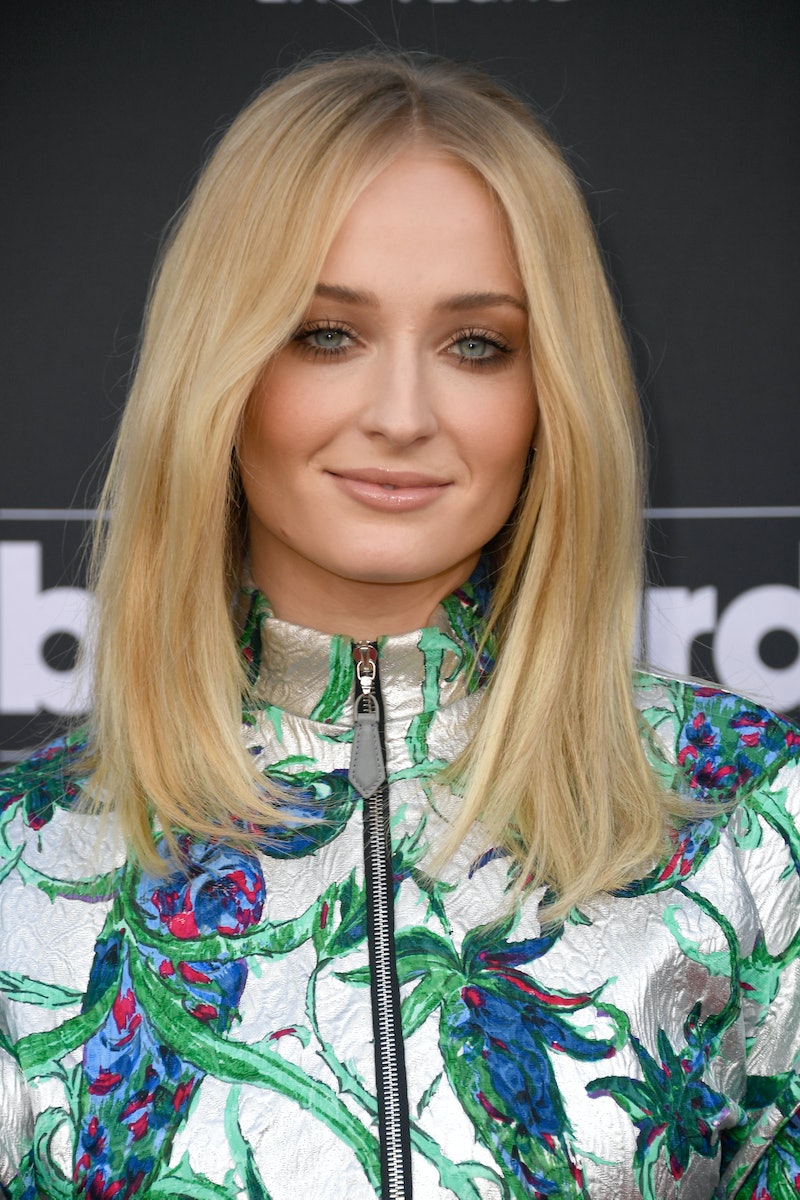 Attention, Game of Thrones fans: Sansa Stark has emerged from the battle of Winterfell to grace us with her presence since the epic episode aired, and she looks so freaking chic. Sophie Turner arrived on the 2019 Billboard Music Awards red carpet in Las Vegas in support of her fiancé, Joe Jonas, who performed with his brothers, The Jonas Brothers, for the first time in more than a decade.

Turner showed up in a gorgeous metallic silver jumpsuit with bright floral embroidery. The futuristic jumpsuit wasn't any 'ol jumpsuit either — it's a piece straight off the runway from Louis Vuitton's Spring 2019 ready-to-wear collection. While it's nothing like Sansa Stark's dark-colored fur and leather ensembles, it does have a strong, soldier-like silhouette to it, perhaps an ode to Turner's powerful character.

While the jumpsuit was show-stopping, what really struck Billboard Music Awards viewers was Sophie Turner's hair. While it's unclear whether she got a haircut or toyed with the blonde color, there's something remarkably different about the way that it looks this evening. Turner kept her hair simple and elegant for the big event, parting it down the middle and adding just a bit of texture and bend to her strands. The ends of her hair curl slightly, giving the overall look an effortless, cool girl vibe.

Perhaps the reason it looks so fresh is because Turner worked with a different stylist for the music awards show. Typically, Turner has her hair styled by celebrity stylist Christian Wood, but according to Instagram, Renato Campora did her hair for the show (as well as her future sister-in-law's, Priyanka Chopra). Whether or not she did get a cut or touched up her color, one thing is for sure — Sophie Turner's hair looks absolutely incredible.

While many Game of Thrones fans wish Turner would have kept Sansa Stark's deep red locks, it was probably really refreshing for the 23-year-old actress to get a new start with a chop and a color change. After all, her hair has gone through a lot, thanks to the show. According to an interview with InStyle, Turner was not allowed to wash her hair while filming the hit HBO series. "For the first few seasons I was allowed to wash my hair because I was an aristocratic young girl. Towards season 5 they started asking me to not wash my hair and it was really disgusting," Turner told the magazine. Luckily, Turner was allowed to wear a wig for the remaining seasons, giving her hair a much needed break. Still, Turner has previously expressed how much damage her hair has gone through due to switching it from blonde to red and back again over the years. In 2017, Turner became an ambassador for haircare brand Wella and since then, she has sworn by their products, including the hair mask and the hair dye.

To complete her red carpet look, Turner wore a soft smoky eye, thick, black mascara, a peachy blush, and a glossy nude lip created by makeup artist Georgie Eisdell. All in all, it was a complete win.