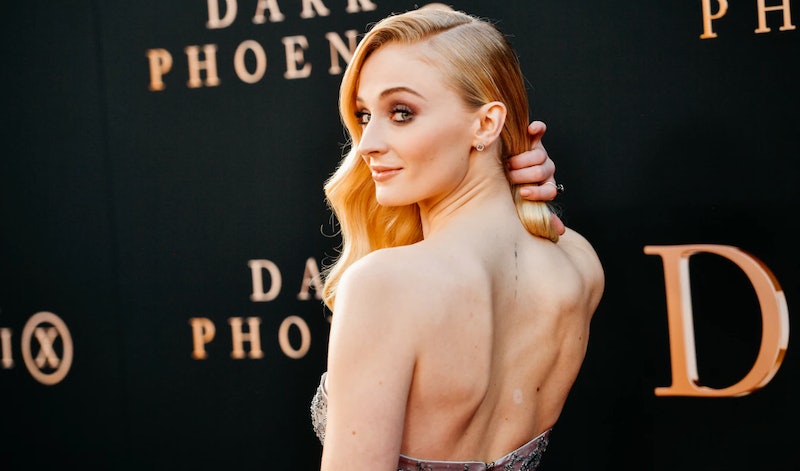 It's really quite hard to argue against the opinion that Sophie Turner and Joe Jonas are one of the cutest celebrity couples of the moment. The pair were recently married in Vegas, but to ensure their friends and family could share in their happiness, Turner and Jonas also wed in Paris last week, in a more traditional ceremony. And as I'm sure many fans have been, I've been avidly waiting to see just what kind of outfit the pair were going to rock. Unsurprisingly, Sophie Turner's wedding dress did not disappoint.

Turner just shared an incredible wedding pic on her Instagram, showing her walking hand in hand with her new husband down the aisle, and we can all get a brilliant view of her epic gown. The dress, which was designed by Louis Vuitton, was certainly a statement, featuring capped square shoulders, a full skirt, and a V-neck neckline with a cinched in waist. To finish off her look, Sophie wore her hair down in a simple style, with a middle parting and some subtle waves at the ends.

While Turner's black and white Insta pic showed off the front of her stunning gown, we also got a great back view thanks to Louis Vuitton designer Nicolas Ghesquière. The dress maker shared a sweet photo of Turner from behind looking into the mirror, presumably prior to walking down the aisle.

The picture shows off the cut-out back, and a closer look at the dress' intricate pattern. It also reveals the ethereal veil, which went down to Turner's waist. The designer captioned his post "Absolut beauty [sic]".

Turner's new husband Joe Jonas looked just as suave as his new bride, opting for a black suit, shirt, and bow tie, along with a pair of super shiny black shoes.

Turner's chosen Louis Vuitton wedding gown is arguably world's apart from the outfit she wore to her legal wedding in Vegas. The star opted for a more casual, non-conforming playsuit, which suited the fun, bold nature of her first ceremony. The playsuit was by Ukranian label Bevza, which offers non-traditional bridal-wear alternative pieces.

As well as the difference in outfits, the guest list at the couple's second ceremony also saw changes, with seemingly (from the photo of the crowd) a more expansive list of invitees. Unsurprisingly, it is said that Turner's GoT bestie Maisie Williams acted as her Maid Of Honour/Chief Bridesmaid, while Jonas' two brothers Kevin and Nick were on hand as the groom's right hand men.

As if you couldn't get any more jealous, the wedding was held in the beautiful Château du Martinay in Carpentras, south France. Like the guest list and the outfits, this location could not be further away from the couple's OG ceremony, which was held in a chapel in Las Vegas following the 2019 Billboard Awards.

While I love these pics of Sophie's stunning dress, I can't wait to see more photos from the day, including what the Maid Of Honour was wearing, and some after-party snaps!