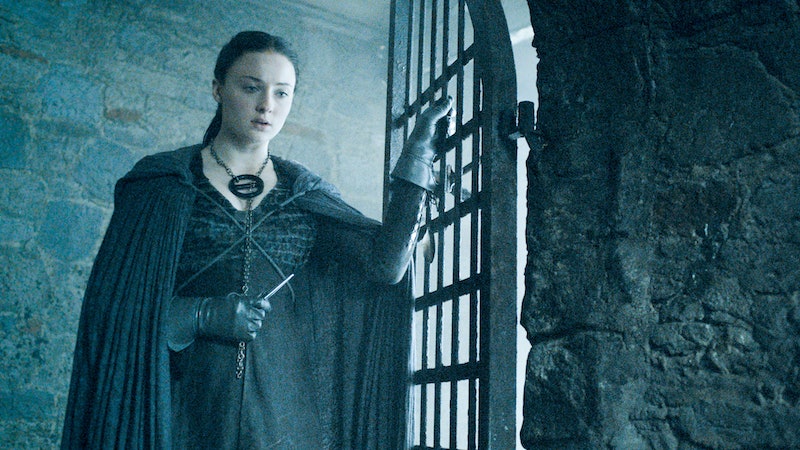 Everyone who watches Game of Thrones has a specific sequence or scene that impacted them the most. The show is known for having its fair (or unfair, to be honest) share of shocking and bloody moments — from the Red Wedding to any number of character deaths. And Sophie Turner's reaction to Ned Stark's death on Game of Thrones proved that not even the actors are immune from being scarred by such shockers.

In a new video interview from HBO, titled "The Cast Remembers: Sophie Turner on Playing Sansa Stark," Turner looked back at all the things she's learned on set over the past 10 years, what it's been like growing up with GoT, and more. One of the things she shared is the scene that rocked her the most, and it might be on your list as well. In the video, the actor called the scene when her on-screen father, Ned Stark, is executed, "the most shocking scene that I didn't see coming." Turner continued, "From then on, I started to distrust the show as to like whether they'd kill my favorite character or not."

So distrusting the writers of GoT isn't exclusively for fans? It's a bit comforting to know that even Turner was taken aback by Ned's brutal beheading. Though, it is also a bit concerning.

Ned Stark's death was truly shocking to us all. After all, the patriarch had, essentially, been the main protagonist throughout Season 1, so to have him so violently killed at the end of the season was a surprise, to say the least. It also sent the message to fans, and to Turner herself, it seems, that no one is safe on Game of Thrones.

But the new interview wasn't all doom and gloom. Turner also shared which scene she likes to watch the most, too, and her answer shouldn't surprise Sansa fans in the least. "My favorite scene to watch is the 'Battle of The Bastards' and Jon fighting," Turner said. "Aesthetically it was so beautiful. And so interesting and unlike any other battle that I'd ever watched, the way it was shot. I was just kinda blown away." The Battle of The Bastards is the large fight that took place at the end of Season 6, pitting Jon Snow and his army of Wildlings and northern troops against Ramsay Bolton, the sadistic lord who took over Winterfell after killing his own father for it. Sansa had a crucial role in the battle, as she urged Jon to go through with it and was able to gain the aid of the knights of the Vale, essentially winning the battle for her brother.

Coming full circle, the actor reflected on what she'd tell young Sansa all the way back in the first season, before her character faced unforeseeable horrors. "If I could give Sansa advice in Season 1, absorb, learn, take nothing for granted, and know that there will be a positive outcome of every negative situation that you're in."

Game of Thrones and Sansa Stark will see their conclusion in Season 8, starting April 14. And Turner's interview begs the question: will Ned Stark's death still be the most shocking for the actor once the season is done? Or could something even more distressing be coming our way?