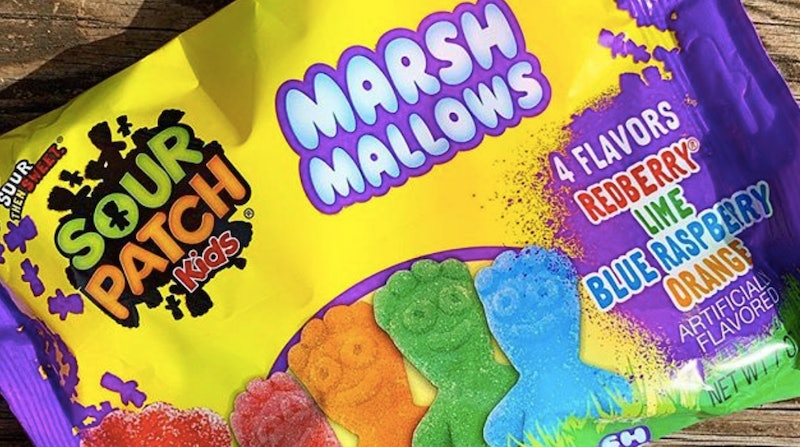 Y'all, Peeps better watch their backs this Easter season, because there's a new marshmallow hitting the scene that's about to leave all the companions in your future s'mores-making endeavors shook. Sour Patch Kids Marshmallows have been spotted out in the wild — literal marshmallows in the shape of the little critter kids you have grown up biting the heads off your entire life, only I imagine now they are much more pillow-y and soft and thereby more likely to weigh on your conscience. And that's not even considering the emotional weight you will feel after blowing them up in the microwave (which, let's be real, was your first thought when the words "Sour Patch Kids Marshmallows" hit your brain).

The new offering was spotted by popular Instagram account @junkbanter, who noted that they were located in the Easter aisle at Walmart. While your first impulse might be to reel in horror (mine sure was), @junkbanter seems to be on board with the twist, writing, "More proof that Easter candy = the greatest candy. These are already the best marshmallows I’ve ever had and I haven’t even had them yet." And to be fair, they did round up some of the best flavors for the marshmallow version, including Redberry, Lime, Blue Raspberry, and Orange. Here's @junkbanter's post showing the outside of the bag below, so you can know what to look for when you roll up to Walmart looking to get sour candy turnt.

Since you may still be in a state of shock and I've had about ten minutes to get used to these existing, here's a running list of what you could do with them:

Anyway, if you manage to survive the existential crisis of Sour Patch Kids Marshmallows, then I invite you to try Sour Patch Kids Cereal, which is also a thing that happened to grocery store shelves in late 2018.

The limited edition cereal from Post made quite a splash among candy stans on the internet, particularly because it did taste alarmingly like the actual candy. I personally was never quite able to reconcile that with the crunchy texture of cereal (or the fact that the milk was sour afterward, which feels like something that, evolution-wise, our ancestors trained our tastebuds to avoid in order to not be dead), but maybe I'll be able to reconcile it with a marshmallow. Looks like we've got until at least Easter to figure it out — godspeed, y'all, and good luck.

More like this
Lotus Biscoff Does A Biscuit-Chocolate Hybrid Now
By El Hunt
The 8 Best Chew Bones For Puppies, According To A Vet
By Andrea Hannah
Dunkin’s Pumpkin Spice Latte Is Officially Back This Week
By Mia Mercado
I Tried The $20 TikTok Viral Oishii Strawberries — Here's What I Thought
By Sophie Hanson
Get Even More From Bustle — Sign Up For The Newsletter