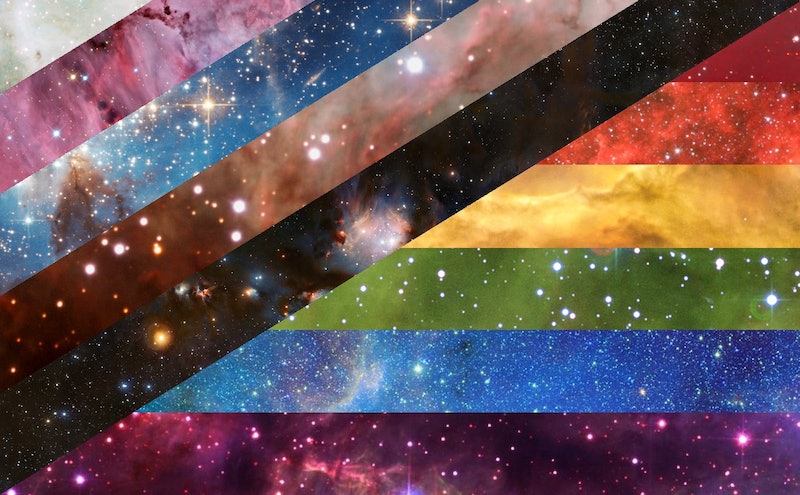 When queer and nonbinary anthropologist and general space enthusiast Laurie Raye went to bed after posting Pride flags they'd made out of photos of galaxies, they didn't expect to wake up the next morning having gone a bit viral. But after what they describe to Bustle as an explosion of enthusiasm from social media users, they've now created 23 pride flags made of space photos, and they're perfect for every LGBTQ person out there who embraces being made of stardust.

"I collect a lot of nebula images on my computer. I really like just staring at them," Raye, 29, tells Bustle. "I had the white, purple and black nebulas that I [ended up using] for the nonbinary flag lined up in my image folder, and I thought, 'If there was a yellow, it would be the [nonbinary] flag.'" After they posted that version, their friends came to them with requests. "I originally did ten flags, went to sleep, and woke up to a flag explosion," they say.

Their series now includes intergalactic versions of well-known flags like the general rainbow flag, the bisexual flag, and the transgender pride flag, but also lesser-known flags, like the aromantic flag and the intersex flag. Raye also made a galaxy version of a flag created by Julia Feliz at newprideflag.com, which offers a redesigned pride flag that highlights the importance of trans people of color in the queer rights movement; that flag can be seen at the top of this page. In their thread, Raye mentioned that these flags could be useful for people with galactian alignments, which are ways that nonbinary and other gender-nonconforming people can identify themselves in masculine, feminine, or androgynous ways without having to actually use terms that reference binary gender, Raye says.

"So for example, a lunarian is someone who feels aligned with femininity, but isn't a woman," they explain. "As an enby who often presents as femme, I can totally get behind being lunarian. Describing myself as a woman is dysphoric, but I don't mind being associated with the moon."

And for folks who want to use Raye's flags, Raye can tell them exactly which galaxies are associated with their identity's flag. For example, for the nonbinary flag, Raye explained in a tweet that from top to bottom, the flag is made up of "omega nebula, tarantula nebula (close up), tarantula nebula again, Messier 78." For the transgender flag they created, "Blue is made of the stellar nursery LH 95, pink is the lagoon nebula, white is the spiral galaxy Messier 74." Raye also says they've created an Australian Aboriginal flag, which "was a special request."

Unfortunately, as is common for trans folks, the experience of having their art spread across the internet hasn't been a smooth one for Raye. "My weekend was very hectic, I couldn't use Facebook at all," they tell Bustle. They explain that they received a number of homophobic and transphobic comments, and spent time blocking people who had tweeted those messages. "It was a bit draining, but I had a lot of supportive friends helping me and making sure I remembered to eat," they say.

They haven't yet had time to make more flags yet, but say they're happy they were able to use their graphic design skills to "make something that my community finds valuable." Raye also urges folks who like and use the flags to support the Mt. Lemmon SkyCenter space photographers who snapped the photos the flags are comprised of. No matter how you identify, Raye's galaxy pride flags are a way to remind yourself and others that you're a total star this Pride month (and any other time of the year).

Update: This story has been updated to include more information about the pride flag created by Julia Feliz at newprideflag.org.