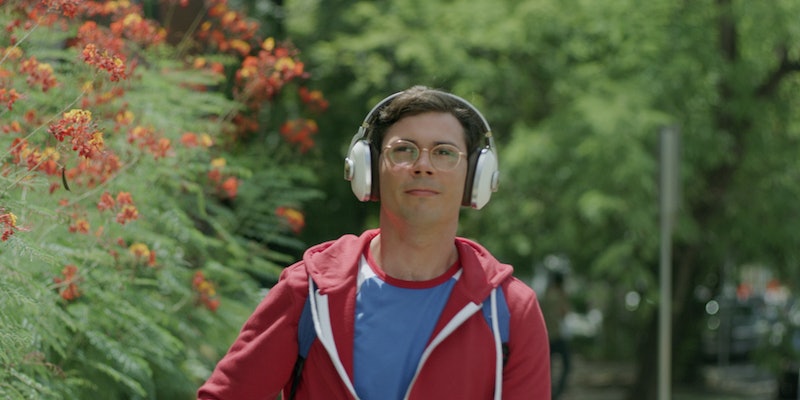 Netflix's new series, Special, lives up to its name. Not only is it a unique show that explores identity, sexuality, and self-acceptance from a perspective rarely seen on TV, but Special is also based on a true story. It's adapted from Ryan O'Connell's 2015 memoir I'm Special: And Other Lies We Tell Ourselves, and is heavily autobiographical: O'Connell, who's worked on shows including Awkward and Will & Grace but never acted, stars as a version of himself. And based on what he's said about bringing Special to screen, he's excited to impart some of the real-life lessons he's learned.

O'Connell is a gay man who has cerebral palsy, and his specific point of view is part of what makes his story so compelling. According to Time, he came out as gay when he was a teenager, and then, later in life, "came out of a second closet" when he publicly revealed that he has cerebral palsy. As he explained to Vulture, he was hit by a car when he was 20, and most people assumed he walked with a limp due to the accident. For a long time, O'Connell struggled to accept that his disability was a part of him, so he decided not to correct them.

"In my eyes, I never related to having cerebral palsy. My case was so mild, and I really was just looking for any opportunity to get cerebral palsy off of me," O'Connell told the outlet. "So when the opportunity came to rewrite my identity as an accident victim — which in my eyes was very relatable because getting hit by a car could happen to any of us, whereas [with] cerebral palsy, you're born with it — I f*ckin' took it."

O'Connell said this helped him feel more confident while dating and pursuing relationships, but that it took an emotional toll. "When I got my book deal, I was dealing with a drug problem and I was in a lot of pain," he continued to Vulture. "I knew deep down that this was my opportunity to come clean about my disability and do it in a very public way. So I came into Simon and Schuster and said, 'I want to write about cerebral palsy.'"

Adapting his story for television wasn't easy (as he told Variety, "putting a gay, disabled lead on TV isn't an instant sell") but it was an important challenge for him to tackle — not just for himself, but for the television landscape as a whole. Shows like Speechless and Switched at Birth have helped to give people with disabilities more representation, but those kinds of stories are still few and far between.

"There's a movement in Hollywood to have more diversity," Jay Ruderman, president of the Ruderman Family Foundation, a disability rights group, told USA Today in 2017. "That conversation is centered a lot around race and has left disability out of it. You're not going to see a white actor playing a Black role, but it's routinely Oscar material for someone to play disability, and it's inauthentic."

USA Today also reports that as of 2017, people with disabilities made up nearly 20% of America's population, yet only 2% of TV characters had disabilities. Of those, the vast majority were played by non-disabled actors, so O'Connell playing himself is huge.

It may have been a long journey to get Special on Netflix, but having a global platform for O'Connell to tell his story is groundbreaking. And hopefully, it's just the beginning of more to come.