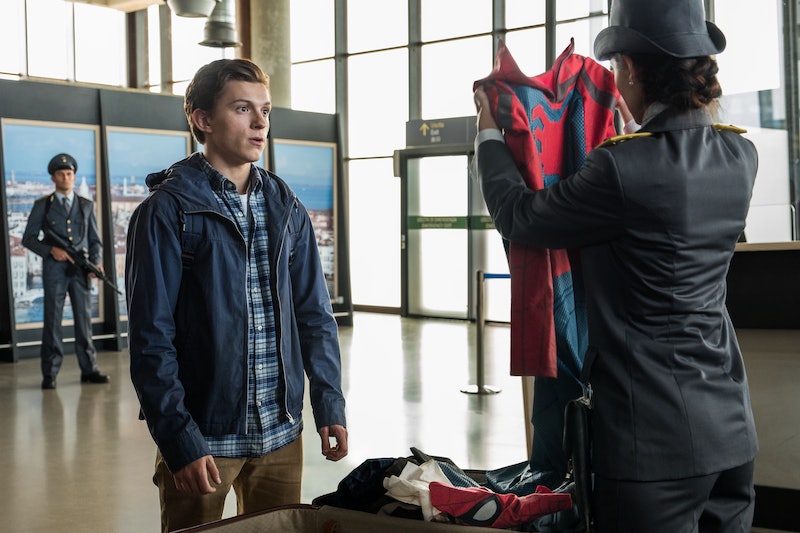 Spider-Man's days as a member of the Avengers may be over before they even really began. In a shocking move, a dispute between Sony and Marvel Studios reportedly ended with Spider-Man no longer being part of the Marvel Cinematic Universe going forward. Sony and Disney, which owns Marvel Studios, reportedly failed to reach an agreement regarding the future of the rights to Spider-Man, according to sources, as reported by Deadline on Tuesday, Aug. 20.

The rights to Spider-Man have been a point of contention between Marvel and Sony for quite some time, with Sony owning the property and releasing two Spider-Man franchises outside of the MCU until about 4 years ago. According to Deadline, the dispute is mainly about financing (and thus profits), and if left unresolved, could end with Marvel Studios President Kevin Feige no longer being involved in the creative process of the Spider-Man franchise, which could mean it's exclusion from the MCU.

(Bustle also reached out to representatives, Disney, Marvel, and Tom Holland for comment.)

This news has fans on Twitter worried about what this means for the future of the current on-screen Spider-Man, Tom Holland, who is fresh off the massive success of Spider-Man: Far From Home. The film, the first in a post Avengers-Endgame world, has been a major box-office hit — according to Deadline, it just crossed the $1 billion mark — and it was just announced that a special edition featuring a new scene would be released on Labor Day weekend.

Beyond any financial consequences, the idea of removing Spider-Man from the MCU, while also making more films centering on Holland's Peter Parker is truly rocking fans to their cores. Ever since his first appearance in the MCU, in Captain America: Civil War, Peter Parker has become a crucial member of the franchise. His story was tightly connected to that of Tony Stark, Iron Man, who acted as his mentor, and — spoiler alert for Endgame and Far From Home — essentially left Peter in charge of his entire superhero legacy.

It's hard to know where both Spider-Man and the Marvel Cinematic Universe will go from here, but here's what we can decipher for now.

Will Tom Holland Be In Any More Marvel Films?

As of now, that doesn't seem likely. Or, if he does appear in a MCU film, it won't be as Peter Parker. Though nothing has been officially announced, it seems unlikely that whatever contract Holland has with Sony would allow him to play the superhero for another studio. (There's a reason no X-Men were set to appear in the MCU before the 20th Century Fox and Disney deal came to fruition.)

The details of this reported conflict could change at any moment, so it's entirely possible that Marvel and Sony will be able to reach an agreement, allowing Holland to continue to appear in the MCU. That said, if Sony and Marvel cannot reach an agreement regarding Spider-Man, it seems unlikely that Feige would invite Holland as Peter Parker back into the fold.

Will There Be More Spider-Man Movies?

Yes! According to the Deadline report, Sony already has two more Spider-Man movies in the works, with Holland signed on to star and director Jon Watts set to return. That said, if fans were hoping for a Captain Marvel cameo in the upcoming Spider-Man 3, they're out of luck. If Spider-Man leaves the MCU, that means no crossovers and no cameos from the Disney franchise. It would also cause a major complication for crossover characters such as Happy, who made his first appearance in Iron Man, and Tony Stark and Stark Industries, who have been present in the Spider-Man franchise.

How Will This Effect The Avengers?

In the last two Avengers films, Infinity War and Endgame, Spider-Man officially became a member of the Avengers, and a prominent one at that. Spider-Man: Far From Home saw him inherit EDITH, and therefore all the technological resources of Stark Industries, making him the leading Avenger in the tech world. In fact, many saw Far From Home as Spider-Man's first step to becoming the next Iron Man. Without him, it's unclear who would take on such a role, or how the Avengers would even begin to explain his absence.

How Does This Affect The MCU & Spider-Man Franchises?

For the MCU, the changes would be slightly less difficult, but no less disappointing. As mentioned previously, it would likely mean the disappearance of Holland's Peter Parker from the MCU, which means they will have to find a new way to carry on Iron Man's legacy in future films. Furthermore, there wouldn't be any other new Spider-Man replacement either. So, fans would have to say goodbye to their web-slinging friend for good, at least in the MCU.

Again, before you start to panic, there is still a chance that Disney/Marvel Studios and Sony can resolve their behind-the-scenes issues. It would be a shame to lose Spider-Man from the MCU, and vice-versa. Hopefully, for all our sakes, whatever conflict there is can be squashed before it's too late.

Editor's note: This post has been updated with a statement from Sony Pictures.