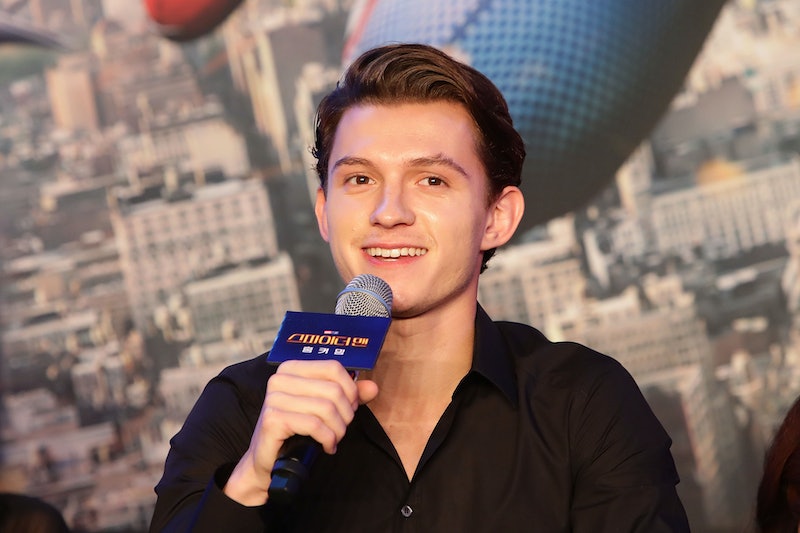 File this one under Marvel plot holes that even the actors themselves can't explain. In the aftermath of Avengers: Endgame, fans are looking ahead to the next MCU release for answers. Spider-Man: Far From Home will be released July 2. But before the movie's opening, there is already major confusion surrounding a plot point in the sequel to Spider-Man: Homecoming. As it turns out, one thing even Tom Holland doesn't know is: why is Peter Parker still in high school?

Think about it: if Avengers: Endgame takes place five years after the original Thanos finger snap in Avengers: Infinity War and the new Far From Home trailer this week confirms that the new movie takes place immediately after the events of Endgame, how are Peter and co. still high schoolers? This completely obvious, if somewhat under-discussed plot hole was brought to light by Jimmy Kimmel when cast members from the new Spider-Man movie were on his show.

After breaking down the twisty timeline, Kimmel asks cast members Holland, Zendaya, Jake Gyllenhaal, Jacob Batalon, and Cobie Smulders, "Why then are you all still in high school? Were there overdue library books?" *cue nervous laughter as each of them tries to decipher an answer.* "Why...why are we still in high school?" Holland sweetly asks, proving once more why the world has fallen in love with him.

Even though Holland gives a nearly unprecedented spoiler disclaimer at the top of the new trailer, he was hard-pressed to figure out this puzzle. Battalon said, "I mean, it might be one of the biggest plot holes of all time." Honestly, he's not wrong. Fans have long ago abandoned any sense of timeline, but this one seems to be truly baffling. Couldn't the new movie have seen Peter, MJ, and Ned going collegiate? It would definitely be new terrain for the character.

On one hand, it makes sense that Marvel would go back to the high school well once more for Spidey. The John Hughesesque tone of Homecoming seemed to resonate with fans. And naturally, the only other Marvel movie of 2019 would have to address the events of Endgame. It's hard to imagine a scenario where the follow-up to such a blockbuster would be a prequel or ignore the fallout from that film. For now, there isn't much light to be shed on the subject. But one can't help but wonder why this question wasn't asked before?

Surely Holland wouldn't have been given an answer either way. He's notorious for slipping up when it comes to spoilers, even revealing in the same interview with Kimmel that he was misled about a major Endgame scene. When he was headed to shoot Tony Stark's funeral scene, he had been told the scene was a wedding instead. It was only when he realized Robert Downey Jr. wasn't present for filming that he began to put two and two together.

In the mean time, fans are trying to do the same when it comes to figuring out Peter Parker's age and schooling situation. Maybe the graduation requirements are different for superheroes and their friends?