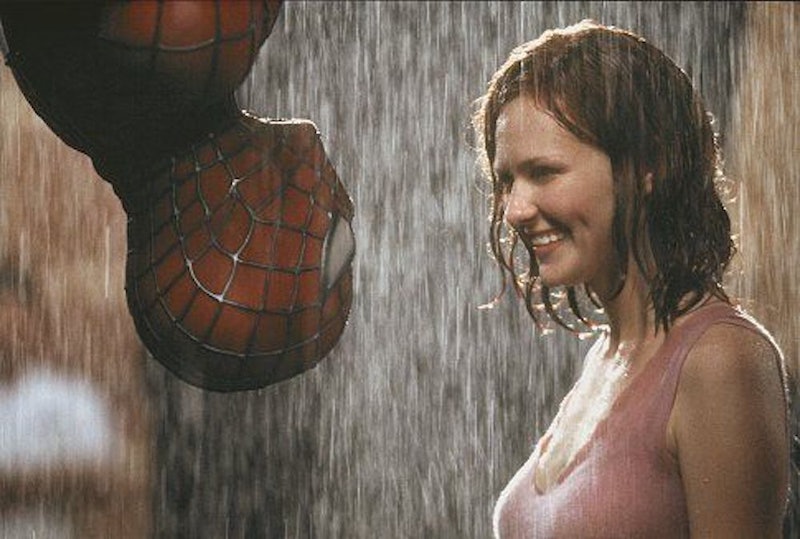 Columbia Pictures/Marvel/IMDb
By Allie Gemmill
May 3, 2017

Remember the early days of the superhero movie craze? Before extended universes and spin-offs and origin stories, superhero movies were, comparatively, a cottage industry. That all changed 15 years ago when Spider-Man swung into theaters. Looking back, there's a lot that can be said about this film but perhaps the one thing that's always nagged me is how Spider-Man's Mary Jane Watson is portrayed. 15 years later, Spider-Man hasn't cast Mary Jane in the best light, even though it's clear there's more to her than meets the eye.

The most noticeable and problematic thing about Mary Jane Watson, all these years later, is that we never really get to know Mary Jane on her terms. All we know about her is shown through Peter Parker, who is hopelessly in love with her. This colors our perspective of Mary Jane: we only ever see her at her most vulnerable, and her prettiest. When we first meet her, Peter is telling us about how he became Spider-Man and how it was all for her. We later learn more about this: Peter uses his newly-acquired superpowers as an amateur wrestler to win enough money to buy a car to impress Mary Jane. Of course, the night he goes to wrestle is the night his Uncle Ben is killed, sending him on a very different path.

Apart from apparently being the entire reason Peter feels he is catapulted onto his Spider-Man journey, the way Mary Jane is defined is troubling. It becomes clear right off the bat she will be a constant damsel-in-distress type and, worse, she will always be defined by the men in her life. The only thing we know about her that is truly unto her is that she dearly wants to be an actress after high school. The fact that she is always someone's girlfriend or Spider-Man's constant victim feels reductive of Mary Jane as a woman.

Mary Jane goes from being the girlfriend of Flash Thompson to the girlfriend of Harry Osborn to the rejected love interest of Peter Parker. She's either too good for the men she dates and as such, is undateable. Or, there are times she is not worthy enough for the men she dates, which again makes her undateable. All of this leads me to wonder which leads me to wonder what women are supposed to gather from Mary Jane in Spider-Man. It would seem the great conundrum of her existence is that she is an object for men's affections and an excuse to show off their heroics, yet she is never quite good enough.

This is perhaps most grossly exhibited during the Thanksgiving scene. Harry and Mary Jane are together at this point in Spider-Man. Harry's feeling nervous he'll lose Mary Jane to Spider-Man since he recently rescued her. As the Osborns, the Parkers, and Mary Jane sit down to dinner when Norman Osborn (the villain) is overcome by his Green Goblin urges. As he storms out, Harry tries to stop him but it only sends Norman into a diatribe about Mary Jane. To Norman, she is a gold-digger, worthless, and only good for one thing. Harry doesn't defend Mary Jane at all, making matters even worse. This whole sequence makes us pity Mary Jane but it doesn't give us any reason to think she's capable of fighting her own battles.

Which brings me to my least favorite part of Mary Jane's portrayal in Spider-Man: Mary Jane as the helpless damsel-in-distress. Peter is so infatuated with Mary Jane from the get-go that his love for her transforms into this incredibly protective impulse when he gains his superpowers. Mary Jane constantly finds herself under threat when she moves to New York City after high school. Whether it's becoming the sole victim of the Green Goblin during parade or being cornered in a dark alleyway by ne'er-do-wells, she is helpless, defenseless, without any means to protect herself. Her survival depends on Spider-Man.

It's all just a little too pat. Objectifying Mary Jane by effectively hobbling her through her dependency on men and definition of self-worth or adequacy by them is incredibly reductive. Watching her now, all these years later, I simply feel sorry for her.

Why couldn't she be written as a stronger woman? She is living on her own in New York City for a majority of the film. Screen time could have been dedicated to showing her really carving out a life for herself. Why didn't we deserve to know more about her? Surely there's more to her (she has a lengthy comic book history, for pity's sake) than simply wanting to be an actress?

Ultimately, looking back in time at Spider-Man, it's clear that Mary Jane wasn't used as effectively as she could have been. While she came along at the unofficial dawn of the superhero movie craze and is thus a relative first for the new era of women in superhero films, it's clear there was a lot left by the wayside in terms of her characterization. Mary Jane, simply put, deserved more from Spider-Man.