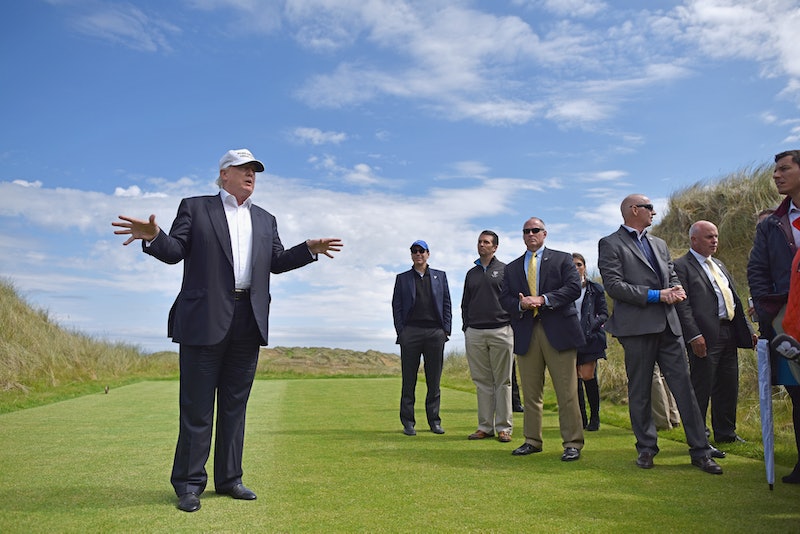 In a long article explaining Donald Trump's complicated relationship with the sport, GOLF magazine reported that Trump supposedly called the White House "a real dump" while chatting with members at one of his own golf clubs. However, the White House has denied that Trump made these comments.

According to GOLF, Trump's reported banter about the state of the White House occurred at his own National Bedminster Club in Bedminster, New Jersey. The outlet reported that, while talking with members of the club, Trump reportedly said to them that "The White House is a real dump," something which, if true, certainly constitutes a controversial remark. (Again, the White House disputes that such a remark was ever made.)

If Trump really did make that comment, though, it could explain why he has so frequently visited his own private golf clubs during his short-lived presidency. GOLF reported that the president seemingly prefers to stay at his privately-owned properties as opposed to 1600 Pennsylvania Avenue.

Trump has visited the Bedminister Club, where he made the supposed White House comment, at least four times during the first six months of his presidency. Indeed, he has seemingly very much set up shop at the club. As GOLF reported, the president has his own cottage right next to the club's pool, recently provided with a secure perimeter by the U.S. Secret Service.

The golf news outlet also reported that Trump supposedly feels very at home and relaxed among club members. Back in November when he was President-elect, Trump hosted a reception and dinner at Bedminster, where he reportedly told club members, "This is my real group. You are the special people. I see all of you. I recognize, like, 100 percent of you, just about." The outlet also reported that Trump then supposedly invited members present at the dinner to sit in on his upcoming interviews with individuals being considered for Cabinet-level positions in his administration.