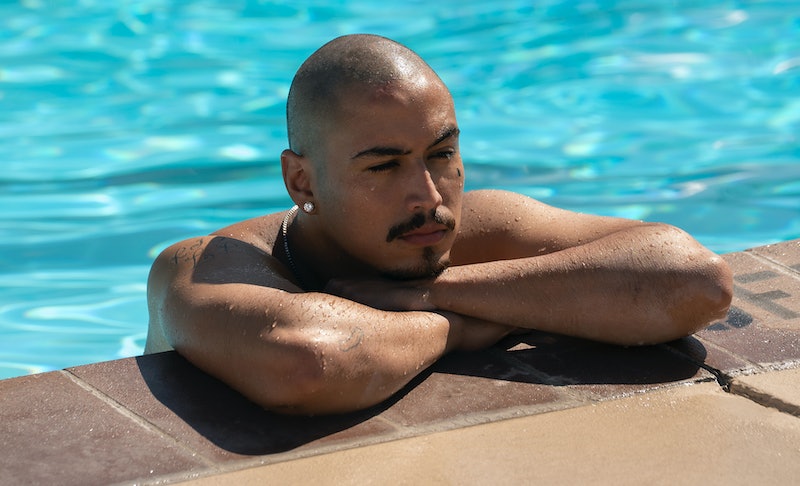 Spoilers ahead for On My Block Season 3. For the On My Block kids, death is a grim reality. First, Ruby's cousin Olivia was killed in the Season 1 finale, and Monse's estranged mother died midway through this newest season. As a result, it seemed like Spooky's fate in On My Block Season 3 was to end up six feet underground, too, near the end of the season. But against all odds, the Santos member had a happy ending — at least for now.

With the Prophet$ out of the picture, the Santos begin butting heads with the rival gang 19th Street in Season 3. Although Spooky had always been loyal to his boss, Cuchillos, he learns that she'd betrayed his and Cesar's father back in the day. Suddenly, he isn't so keen on doing her bidding anymore and decides to kill Cuchillos in order to protect Cesar and his friends. But when Spooky goes over to try and make peace with 19th Street in exchange for his jefa, the gang kidnaps him.

Fortunately, the Santos member is able to convince them that although Cuchillos had made a deal with 19th Street, she won't be true to her word (which is true). But if they team up with him, Spooky argues, he'll treat them as equals. Cesar, meanwhile, becomes convinced that his brother is dead and mulls over their final argument, which he feels guilty about. He and his friends eventually receive an address from 19th Street, where they assume they'll find Spooky's body. Instead, however, they discover Cuchillos, whose corpse their rival gang is about to burn and bury.

Cesar's brother is then shown back at Ruby's getting stitched up by abuelita, who seems disturbingly unfazed by all of the blood. "You'd be surprised how much of the body can be sewn back together," she tells him matter-of-factly. But while Spooky has handled the latest gang conflict, his storyline doesn't end there: Season 3 concludes with a two-year flash forward. After going to a fancy private school, Monse has all but forgotten about her friends back at home. Jasmine and Ruby are still together, while Jamal has become — against all odds — a bona fide athlete.

Spooky, however, has the most surprising trajectory of all the characters in On My Block. Not only is he shown with a full head of hair in his flash forward, but the former gang member is greeted by his pregnant girlfriend at a picturesque backyard barbecue. This is a welcome callback to what he'd told Cesar earlier in the episode: "I don't need this sh*t," Spooky says after his brother accuses him of being naive for making peace with 19th Street. "I want adult problems. I want to own a house — maybe have a wife, a kid."

It's so heartwarming that Spooky, who began the series as a hardened gang member, has had such a character arc. Not only has he become more affectionate toward his little brother, but he's begun looking after Monse, Ruby, Jamal, and Jasmine, too. Perhaps more importantly, however, is the fact that Spooky has managed to break the generational cycle. Not only was their father largely absent during their growing up years, but their grandfather was even worse, as Ray tells them. Spooky, on the other hand, is determined not to perpetuate this violence any more than he already has.

But despite his retirement, the gangs aren't going anywhere, and neither is his family's involvement. In Episode 8, Cesar asks Spooky what will happen if someone tries to take his power. "Let him," his brother responds with a shrug.

It turns out to be Cesar who takes charge of the Santos, which audiences see during his flash forward. Spooky may have made it out of gang life, but his brother wasn't so lucky.

More like this
Netflix Shut Down 'Bridgerton' S3 Rumours About A “Very Dark” Storyline
By Bustle
You Might Want To Rewatch This Key 'On My Block' Scene To Understand 'Freeridge'
By Grace Wehniainen
The 'Freeridge' Cast Shared Their Hopes For A Potential Season 2
By Grace Wehniainen
Everything To Know About A Potential 'Lockwood & Co.' Season 2
By Gretchen Smail
Get Even More From Bustle — Sign Up For The Newsletter
From hair trends to relationship advice, our daily newsletter has everything you need to sound like a person who’s on TikTok, even if you aren’t.