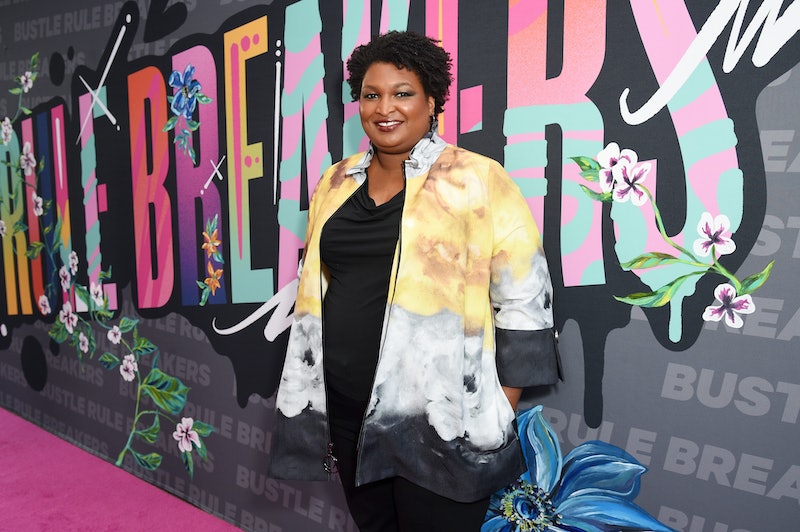 You can feel the hope dripping off people when Stacey Abrams comes near. "You're going to be my president," someone told her as she hit the pink carpet at Bustle's second annual Rule Breakers event celebrating 2019's biggest trailblazers. Abrams was less than 2 percentage points away from becoming the first black female governor in the United States, and has made clear she's not running for president — this time around, anyway. But the possibility of her on the 2020 ticket feels very real.

"I am happy to be considered and I don't want to be presumptive, but of course it's a job I'd be honored to have if someone wants to offer it to me," Abrams told Bustle when asked about the possibility of becoming the Democratic nominee's vice presidential pick. "But until that's done, I'm going to work on making sure we have voting rights in America, and that we have a census that counts everyone, because no one should be erased from the narrative of who we are as a country."

Since narrowly losing the Georgia gubernatorial election in 2018, Abrams has become a bona fide political icon. She was recently named a 2019 Rule Breaker in Bustle's annual Rule Breakers issue, and told Bustle in August that she has been humbled by the attention that surrounds her, which included a mural of her painted across the side of a building in Atlanta. At Rule Breakers, she told Bustle she's still unsure of her icon status, saying she thinks people are "overreading" the situation.

"I am deeply humbled by the energy and the excitement, but I hope what people see is that I'm a reflection of their values and their aspirations," Abrams tells Bustle. "My job is to be a voice for others, not to simply be an example of things, because whenever it becomes only about a politician, then we forget that it's really about people and their voices being heard. I want people to want me because they see themselves getting more from my election."

Abrams affirmed that she will not run for either of the two open Senate seats in Georgia. Republican Sen. David Perdue is up for reelection in 2020, and the state's other senator, Republican Johnny Isakson, announced he would not seek reelection, citing health challenges. As FiveThirtyEight pointed out, when two seats are on the ballot at the same time, they often tend to go to the same party, meaning Democrats have a unique opportunity to gain two Senate seats here. But Abrams, who would be a strong contender for an easy win, has made it clear — several times — that she won't join the race.

"We have the authority to change the world."

In August, Abrams told the New Yorker that the pace of change is too slow in Congress, and that she doesn't take a job just because she's available. That same month, she flat out told The New York Times, "My decision not to run for the Senate was because I do not want to serve in the Senate."

She says it was disconcerting to have everyone's eyes on her wondering what she was going to do next, because she's normally very private. "It wasn't easy for me to make the decision, but the decision in the end was simple," Abrams said on the pink carpet at Rule Breakers. "That was not the job I wanted, and what I do next has to be something I do because it helps me do the work I want to do in the best was possible."

In multiple recent interviews, Abrams said that one of the most important things she wants to see from the Democratic presidential candidates is that they make Georgia and the South a priority. According to the Atlanta Journal-Constitution, which is tracking candidate visits to Georgia, all of the top 10 candidates have visited Atlanta at least once. Elizabeth Warren, Bernie Sanders, and Pete Buttigieg are the only candidates who have also visited other, smaller, cities in Georgia as part of their campaigns. Abrams says the 2020 candidates are doing well so far, but there's still more work to be done.

"I'm excited about the number of candidates who have talked about voter suppression, who have put plans out about it," Abrams tells Bustle. "Now what I want to see next is conversation about it on the debate stage, and that's the next piece I'm going to push."

Abrams wants to make clear that not running for office right now doesn't mean she's out of the process.