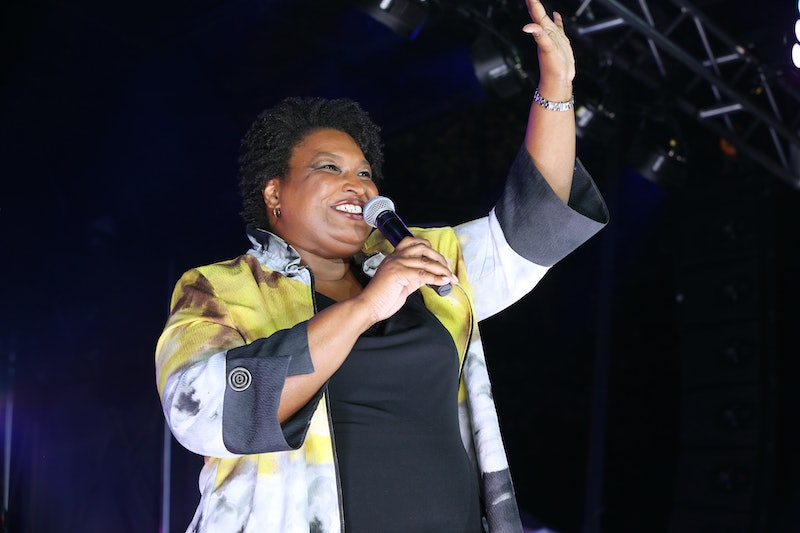 On stage Thursday at The Riveter Summit in New York City, voting rights activist Stacey Abrams recalled how she decided to run for governor of Georgia in 2018. She had been planning it for years, she said, ever since she was a member of the Georgia state legislature. The tipping point was a legislative session she'd sat through where mostly white men voted for a tax cut for the wealthy and against a $5 tax break for poor families, agreeing that $5 "wouldn’t make a difference."

Abrams, who Bustle honored as one of its 2019 Rule Breakers, made headlines in April when she announced that she would not run for the U.S. Senate in 2020 and would not join the 2020 presidential race. She has also said that she would "be honored" to be the running mate of whoever ends up being the Democratic presidential nominee.

Abrams' remarks at The Riveter Summit also touched on her family history of activism — she said her grandparents were involved in the civil rights movement — and her response to losing the 2018 gubernatorial election in Georgia. Speaking one day after its anniversary, Abrams clarified that she concedes the "legal sufficiency" of that election, but does not agree with state laws that she says prevented some Georgians from voting.

She also suggested that she may run for governor again. “If I become governor at some point, it will be in a new election,” Abrams said.

One of Abrams’ messages to the audience, most of whom were attending a conference focused on “Women Building the Future,” was, “We can’t forget the pain.” As she has done consistently, Abrams framed her 2018 campaign and its result as larger than herself, an example of how unfair election laws disenfranchise minority and low-income voters.

"The pain is real and I hold it close," Abrams said. "I’ve had businesses fail, I’ve not won elections, but the things that hurt me most are the things that were most important to begin with."

Abrams spoke as a guest of The Riveter, a coworking startup that has newly positioned itself as "a modern day union of working women and allies providing community, content, resources, and coworking spaces.” Bustle Digital Group is one of The Riveter’s media partners on the Summit.

In keeping with the tone of the event, Abrams had some more lighthearted moments. She shared that her sisters checked in with her Wednesday — on the anniversary of her election loss, obviously at the behest of her mother — and how she coped (cake was involved). A year ago, she said, she decided to “sit Shiva” for the election. “Because I’m Southern, it took 10 days instead of 7,” she quipped.

Then Abrams' ambition peeked through again. “I’m going to work harder the next time,” she said.