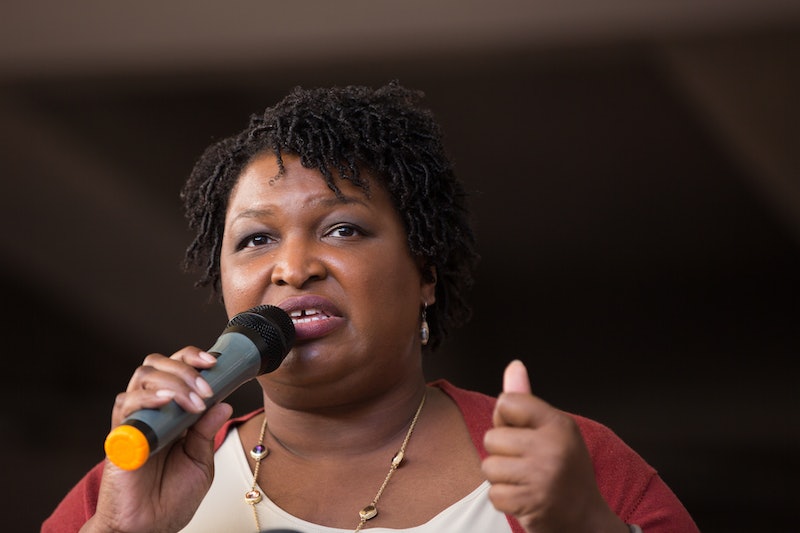 The Georgia politician who gave the Democrats' rebuttal to this year's State of the Union address implicitly criticized President Donald Trump's national emergency when talking about voter fraud and suppression on Tuesday. Stacey Abrams called voter suppression a "real national emergency" and called for action in an interview on CNN.

"The threat to democracy in our country is real," she said. "Voter suppression is real, and it's non-partisan — although it does disproportionately affect African Americans in Georgia and people of color and poor communities across the country."

The former Georgia House minority leader also called voter fraud "largely a myth" and said it only happens occasionally. Voter suppression, on the other hand, is "real" and a "wrong decision for our country for people to doubt that their votes count," Abrams said.

Following her loss in the 2018 Georgia governor's race, Abrams and her supporters founded Fair Fight Action, a group focused on overhauling Georgia's election system. The group filed a lawsuit in November, asking a judge to order fixes to the state's system after Abrams accused her opponent of making it harder for many of her supporters to vote, which he denied.

Abrams' concession speech in November was characterized as a "non-concession speech" by many in the media. "I acknowledge that former Secretary of State Brian Kemp will be certified as the victor in the 2018 gubernatorial election," she said. "But to watch an elected official — who claims to represent the people of this state, baldly pin his hopes for election on the suppression of the people’s democratic right to vote — has been truly appalling."

The Georgia secretary of state's office disagreed. "With a record high of 7,000,000 people on Georgia’s voter rolls and unprecedented voter turnout in November’s midterm election, it has never been easier to register to vote or make your voice heard at the ballot box in our state," a spokesperson said in a statement provided to USA Today in November. "Along with thousands of local elections and registration officials across our state, we remain committed to secure, accessible, and fair elections for all voters."

Abrams was on CNN Tuesday as part of a segment on what has transpired in North Carolina, where a women testified Monday during a state board of elections hearing that she had picked up and falsified absentee ballots during the 2018 election. Results from the congressional race in question remain uncertified as the allegations of fraud are fully investigated.

"My hope is that the state elections board will declare the election results null and void and will do a do-over," Abrams told CNN about the North Carolina debacle.

She went on to compare the situation to a race in Georgia, where a state House seat is being voted on for the third time. She blamed this on problems with the "election system that was managed by" her opponent, former secretary of state and current Gov. Brian Kemp. Bustle reached out to Kemp through the governor's office for comment.